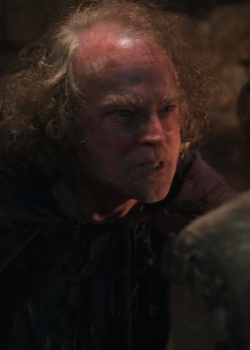 Zoso, more commonly known as the Dark One, is a minor supporting character on Once Upon a Time. He was a man cursed with eternal life, but gifted with powerful magical abilities. However, these abilities are wasted as Zoso is controlled by the Duke of the Frontlands, who owns a dagger with the power to control and kill Zoso. Feeling burdened with his life, Zoso manages to manipulate an innocent Rumplestiltskin into killing him, passing his powers on to him.

In an underground room lit by torch fire, a man is sweeping the floor when suddenly the fire hauntingly blows out. He drops his broom and pulls out a sword, almost routinely stating "Show yourself Dark One". "You are not the sorcerer" a mystical voice echoes from behind him. The man turns around to see a cloaked figure headed towards him, waving the dagger of the Dark One. "No, I am his apprentice. And you are not the first Dark One I have faced" the man tells his foe. The apprentice charges towards the Dark One and swings his sword, but he vanishes into thin air, reappearing behind him. The apprentice tries again, but this time is sent flying back and to the floor with a push of magic. The Dark One then turns his attention to a box in the middle of the room which rests on a stone table. The box is the starry box which Rumple later finds in Storybrooke. As the Dark One prepares to open it, the apprentice warns that he doesn't want to know what he'll unleash if he opens the box. The Dark One removes his hood, revealing himself to be Zoso, and he says the sorcerer should not have put his faith in someone like him. He then takes his dagger and waves it across the box, but is instantly blasted with a protective shield, sending him flying through the air. The apprentice gets to his feet and reveals he isn't the only thing his master has faith in, referring to the magical shield. Zoso is furious that there's an enchantment on the box. The apprentice reveals that no one who has ever succumbed to the darkness in their heart can open it. He tells Zoso to be gone, and with that, he vanishes. "Every Dark One has tried, but no Dark One will ever possess what is in that box" the apprentice says to himself, now alone. ("The Apprentice")

A girl by the name of Morraine is taken from her parents in Rumple's village, he shields his on, Baelfire, from the sight but is warned that soon Bae will be fourteen years old, like Morraine, and therefore carted off to a pointless war. Rumple assures his son that he'll find him a way out. As Rumple is running away with Bae, he is found by Hordor and his son is exposed to the truth from the soldier, that his father ran away from war and that his wife left him in shame, Bae is maddened by this as he believed his mother to be dead. Rumple's only way to be let go is to do something for Hordor - kiss his boot. Rumple obliges and is kicked in the face as all of the soldiers laugh at him. Bae and his father are soon taken in by a hospitable old man by the name of Zoso who assures Rumple of a way to prevent his son from going to war - finding the Dark One's dagger which will give him the power to control said Dark One. Rumplestiltskin breaks into the Duke's castle and steals the Dark One's dagger, he is soon presented to the Dark One himself and kills him, taking his magic. The Dark One is revealed to be Zoso who warns Rumple that all magic comes with a price. ("Desperate Souls")

In Storybrooke, Emma now has both halves of Excalibur, as well as the means to unite them. Her vision of Rumplestiltskin points out that it's a thing of magnificence and asks her if she knows what the sword as a whole represents. She assumes power, but he tells her that it's history, adding that Excalibur's promise was forged long ago and that now it's finally going to come to fruition. He tells her that it's time and she wonders why he won't leave her alone, at which a new vision of Nimue appears and tells her that they couldn't; she says that Rumplestiltskin's eyes are fine to look through most days, but that she wanted to see this for herself. Soon enough, every single past Dark One, including Zoso, appears to Emma via vision, encouraging her to repair the sword. Emma soon takes the ember from the Flame of Prometheus and retrieves the spark from within, compressing it into a ball of light which hangs in midair as she forces the two ends of Excalibur into it. Soon enough, the sword is complete, but Emma hesitates before going to pluck it from the air. She tells a confused Nimue that Merlin told her not to do exactly this when she was a little girl, at which the first Dark One points out that she's a woman now, and the Dark Swan is convinced the take the power when all the others chant for her to do so. She stands there, holding the complete Excalibur, her plan ready to unfold. ("Nimue")

After dueling Rumplestiltskin, Hook, having remembered that he is a Dark One, now has what he needs in order to open a portal to the Underworld: the blood of a man who's been to hell and back. He dips his hook, which is doused in Gold's blood, into a pond in Storybrooke, causing a lot of mist to appear. A boat soon emerges from this mist, led by the Charon, and a myriad of cloaked figures are his passengers. Every single past Dark One - including Zoso - returning to the land of the living. Nimue, in her mask, is the first to exit the boat and approach land. Hook greets her as she reveals her green and scaly face, and she tells him that they're all there as promised, in the flesh. She adds that now it's time for them to get to work and do what Dark Ones do best, which is snuff out the light. Hook welcomes her to town, excited for this prospect. ("Broken Heart")

With the resurrected Dark Ones having been unleashed upon Storybrooke, including Zoso, each one of them marks a living victim to be dragged down to the Underworld in their stead, thereby ensuring them permanent places back in the land of the living. Marked victims include Regina and Robin, who are ambushed when confronting Zelena, Snow and Charming, who are ambushed near the latter's truck, six of the seven dwarfs, who are surrounded on Main Street, Henry Mills, who's personally gone after by Nimue, and Mr. Gold, the man who's been to Hell and back and who educates the others on what they're going to have to face. The Dark Ones continue to move through town, waiting for the moon to reach its peak, for that's when the Charon will arrive on his ferry to take the marked victims down to the Underworld. When the time comes, everyone is teleported to the pond, and the Dark Ones wait patiently for it to happen. However, Hook's change of heart ruins everything for them, because he absorbs them into Excalibur and then has Emma strike him down with it, destroying both him and the darkness. It is later learned that the darkness wasn't destroyed though, having been redirected into Mr. Gold, who now possesses the combined power of every past Dark One. ("Swan Song")

Retrieved from "https://onceuponatimeabc.fandom.com/wiki/Zoso?oldid=83780"
Community content is available under CC-BY-SA unless otherwise noted.