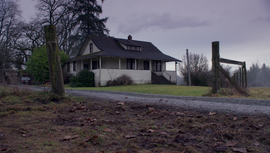 This farmhouse is the Storybrooke home of Zelena and her daughter.

When a second curse is cast, sending all those of the Enchanted Forest back to Storybrooke, Zelena moves into a farmhouse where keeps an enslaved Rumplestiltskin locked away in the storm cellar. ("Witch Hunt") As she goes on about "keeping up appearances", Zelena shaves Rumple, accidentally cutting him. Emma and Hook soon discover the farmhouse where they go down to the storm cellar, only to find it empty with nothing but golden straw, causing them to realize Rumple is alive and on the run. ("The Tower") While everyone else searches for the Dark One, Regina and Robin Hood investigate the farmhouse and end up sharing a few moments, one of which includes the formerly Evil Queen discovering Robin's lion tattoo, and realizing that he was the true love she chose not to meet all those years ago. Later on though, after Neal's death and the identity of the Wicked Witch is reveal, Rumple is taken back to his cell in the storm cellar and locked up once more. ("Quiet Minds") During Neal's public funeral, Zelena torments Rumple, who is unable to attend. Later on, Belle goes down to the storm cellar in hopes of being able to get through to Rumple, but it turns out Zelena was watching the whole time, and so she has the Dark One chase his true love away. ("It's Not Easy Being Green")

Zelena forces Rumple into a suit and to attend a dinner she has set up; as they dine, she reveals more about her plans to travel to the past. Rumple ends up going in to seduce the Wicked Witch, but all as a ploy to steal back the dagger. She soon catches on, and forces him back to his cage. ("Bleeding Through") After Mary Margaret has her new baby, Zelena successfully kidnaps him, and is able to cast her spell. However, the heroes arrive in time to stop her, and Regina successfully defeats her with light magic. Though defeated, once Rumple regains his freedom, he turns her to porcelain, supposedly killing her, but due to a fail-safe in her spell, the time portal opens. ("Kansas") Once everyone comes to realize the time portal is open, Emma and Hook go to investigate, but end up falling through. ("Snow Drifts") After restoring everything that was altered in the past, Emma and Hook return home, bring Robin's suppose-to-be deceased wife, Marian, with them. However, what no one realizes is that not only Marian came through the portal with them, but also a magic urn that released the Ice Queen, Elsa. ("There's No Place Like Home")

Having fallen through the portal back to present day Storybrooke after Emma Swan and Captain Hook's adventure to the past, Elsa, the Ice Queen of Arendelle, is released from the magic urn she was detained in. After blasting said urn with ice, destroying it, thus making it so she may never be imprisoned again, she exits the barn to learn where exactly where it is she is at, and to subsequently find her sister, Anna. ("A Tale of Two Sisters") The Dark One, Rumplestiltskin, ends up returning to Zelena's old farmhouse's barn at some point where he collects the remains of the magic urn Elsa was entrapped in, which he goes on to use against the evil Snow Queen in order to stop her from warning off Emma. ("Smash the Mirror") Months later, after Robin Hood's suppose-to-be deceased wife, Marian, who has returned, ends up revealed as the also-suppose-to-be deceased Wicked Witch, Zelena, a montage is shown of how Zelena traveled through the time portal with Emma and Hook, and how she returned with them as Marian. ("Heart of Gold")

Retrieved from "https://onceuponatimeabc.fandom.com/wiki/Zelena%27s_Farmhouse?oldid=108024"
Community content is available under CC-BY-SA unless otherwise noted.