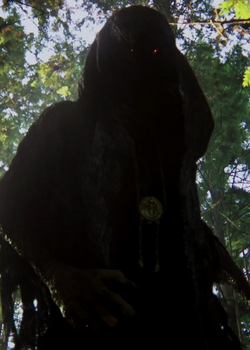 A Wraith, also known as a Qui Shen, is a minor character on Once Upon a Time. It is a soul sucker that condemns people by marking them with a talisman which means that it will hunt them down until it kills them.

Mr. Gold promises Belle that he won't kill Regina, however, he doesn't promise that something else won't. Gold retrieves the wraith's talisman from his shop and visits Regina in prison, he presses the talisman up to her hand, marking her. Gold then goes out into the woods and summons the wraith, it appears before him. Storybrooke goes into despair once the wraith is flying around, hell-bent on finding Regina, and, it finds her in the sheriff's office, locked in her cell, it begins to suck out her soul. Snow White, Prince Charming and Emma go to rescue Regina from the thing and Charming tries his best to fight the thing off but fails, Snow, however, manages to fend it off with hairspray and a cigarette lighter, creating a puff of fire in its face, it goes out the window. Snow asks if she killed it but Regina tells her that she hasn't, as you cannot kill what's already dead, her suggestion to get rid of it is to send it to a place that it cannot hurt anyone. At the mayor's office, Regina retrieves Jefferson's hat from a hat box to fight the creature with, for defense, Snow, Charming and Emma arm themselves with flaming brooms, as Regina tries to spin the hat to no avail. The wraith attacks and the trio try to attack it, however, it overpowers them, Regina cannot make the hat work, that is, until Emma touches her shoulder, putting magic into it. The hat opens a portal and the wraith is sucked down into it. Unfortunately, so are Emma and Snow. The wraith breaks out in the fairytale land at Aurora and Phillip's castle and begins to attack Mulan, Princess Aurora and Prince Phillip, Phillip fights it off but accidentally grabs its talisman as he does so, marking himself. Later, Phillip goes missing and Mulan and Aurora go searching for him. It doesn't take them long to find him but the wraith shows up too soon. It begins to suck out his soul, and, this time, completes the process, killing Phillip in front of the women who love him, the wraith disappears. Later, Mulan and Aurora mourn Phillip when Snow and Emma arrive, they blame them for making the wraith appear. ("Broken") Emma later remembers the Wraith when Hook gives her a potion after losing her memories of Storybrooke. ("New York City Serenade")

Retrieved from "https://onceuponatimeabc.fandom.com/wiki/Wraith?oldid=93169"
Community content is available under CC-BY-SA unless otherwise noted.