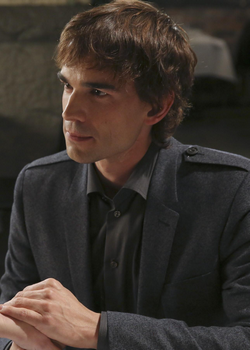 Walsh is a minor character on Once Upon a Time. He was originally a simple circus huckster from Kansas until one day he ended up in the land of Oz. With everyone believing him to be this great and powerful wizard, he takes the identity of Oz, the Great and Terrible, residing in the Emerald City. This ruse didn't last for long, however, as the Wicked Witch of the West discovers who he truly is, and as punishment, turns him into one of her flying monkey minions. When Emma Swan and her son Henry evacuate Storybrooke and move to New York, he is sent as a spy, transformed back into his human self and gets close to the Savior by becoming her boyfriend of eight months. However, she ends up murdering him when her true memories are restored and she discovers who he really is.

Originally from Kansas, Walsh makes his way to Oz where he becomes known as an all-powerful wizard, "Oz, the Great and Terrible". From behind a curtain, Walsh projects a shadow image and speaks with a booming voice to anyone who approaches his palace to seek an audience with him. He also asks for genuine magical items in exchange for help which he uses to further his deception. He is soon met by a witch named Zelena who is in search of her biological family. Walsh uses one of his magical items to discover that Zelena's mother is a woman named Cora. He also reveals that Zelena has a half-sister, Regina. The sorceress wants to know more, so Walsh gives her a pair of silver heels that can take her anywhere she desires. Zelena uses them to go to the Enchanted Forest. Some time later, Zelena returns, jealous of her sister's life. She asks the wizard to send her back in time so she can stop Cora from abandoning her. Walsh states that even with the most powerful magic, that is not possible. An angry Zelena rips off the curtain and discovers the real Walsh: a simple man who likes orchestrating a false image to put on a good show. Walsh tells Zelena his back story, but the furious witch decides to turn him into a flying monkey, making him her loyal pet. ("It's Not Easy Being Green")

Following his transformation, Glinda, the Witch of the South visits Zelena in Emerald City. Glinda thanks Zelena for exposing the wizard for what he really is and that some time as her pet is a fitting punishment. Glinda then welcomes Zelena into her sisterhood of witches, but this doesn't last long as a girl named Dorothy Gale arrives. Zelena grows jealous of the girl, and her true colors start to show. Zelena starts turning green again, and soon enough she is defeated by Dorothy. Rather than become the new Witch of the West, Dorothy only wishes to go home; a desire Glinda grants by taking her back to see the Wizard, who is presumed to have reverted to his old form since Zelena's magic has been undone. The wizard gives Dorothy the silver heels, and the young girl is sent home. However, it is soon revealed that Zelena impersonated that wizard. She then banishes Glinda to the Enchanted Forest. ("Kansas")

After Emma and Henry leave Storybrooke to live in New York, Emma meets Walsh and they start dating. What Emma doesn't know is that Walsh is a flying monkey that is following orders given to him by Zelena. Several months later, Emma meets Walsh for a date which is crashed by Captain Hook. He sits opposite Emma once Walsh leaves for the bathroom and hands her an address, assuring her that it will provide proof that the memories in her head aren't real. When Walsh returns, he proposes, and a shocked Emma leaves the restaurant, saying that she just needs to time to think about it. She returns home to Henry who tries to give her some advice. Instead of thinking about Walsh's proposal, she meets up with Hook and drinks a potion that returns all of her memories. She is sad to see her perfect end, but knows she must go back to Storybrooke. She tells Walsh that she has to leave for a while, but he doesn't take kindly to this, and begins attacking her, revealing himself to have been a flying monkey in disguise all this time. Emma beats him with a pipe, hitting him off the roof and killing him. ("New York City Serenade")

1 of 4
Add photo
Retrieved from "https://onceuponatimeabc.fandom.com/wiki/Walsh?oldid=93165"
Community content is available under CC-BY-SA unless otherwise noted.