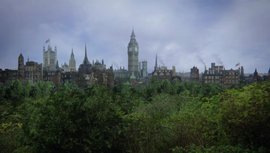 Victorian England is a world of its own, separate from London, England and 1920s England. It is Alice and her family's home land.

As a little girl, Alice falls down a rabbit hole, leaving Victorian England and going on her first adventure to Wonderland. Once returning, she tries telling her father, Edwin, of her adventures, but he refuses to believe her, slowly thinking she is insane. One day, during her teen years, Alice overhears her father speaking with Dr. Arthur Lydgate about getting his daughter admitted to an asylum. Wanting to prove her father wrong and that Wonderland does in fact exist, she goes back down the rabbit hole and back to the strange land. ("Down the Rabbit Hole") Once returning a second time, Alice is heartbroken over her lost love, a genie named Cyrus. She also learns her father has since remarried to a woman named Sarah, and the couple have a daughter, Millie, together. As Alice goes on and on about Wonderland, her family continues to think she is losing her mind, so finally the young woman agrees to go to the asylum, wanting her memories of the genie erased. ("Who's Alice?")

Retrieved from "https://onceuponatimeabc.fandom.com/wiki/Victorian_England?oldid=102194"
Community content is available under CC-BY-SA unless otherwise noted.