Start a Wiki
Vault of the Dark One 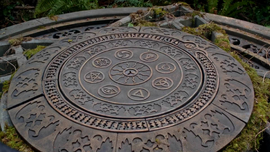 Belle and Neal head to Rumple's old castle together in order to find a way to resurrect the Dark One, and Belle thinks the way to go about this is to inspect the rather extensive library, for there could be books on the subject. They light a candle to help them see better, but to their surprise, the candlestick begins talking. Suddenly, a face forms out of the fire, and the mysterious being introduces itself as Lumière, explaining that he was trapped in this form by Rumplestiltskin when he was unable to uphold his end of a deal and can only come out when his candles are lit. He helps the pair of them, when they say Rumple will be able to reverse what was done to him, by showing them a large book in which a key is kept: the key to the Vault of the Dark One, where the very first Dark One was made. They find this vault within a snowy clearing and light up Lumière once they do. When they dare to question his knowledge, he argues that he's been kept up in that library for over two hundred years, despite Belle knowing that it was built not long before Regina's curse was cast. This leads the candelabra to admit that the Wicked Witch was in fact the one to imprison him so that Neal and Belle would resurrect Rumple and she would be able to control him, but Neal simply takes this to mean that it can be done, despite Belle protesting that it must be the wrong thing to do. Deciding that the cost is worth it, Neal places the key into the center of the vault and burns his hand as he does so, causing it to open and for Rumple to form from the inky blackness. Suddenly, Neal collapses and the Wicked Witch arrives on the scene, explaining to them that a life must be exchanged in order for Rumple's to be saved, ergo Neal is dying so that his father may live. Rumple tries his best to save his son, but the Witch points out that he can't keep Baelfire as well as his dagger, and so he hands over the latter, allowing himself to absorb his son and keep him sustained within his own body. However, two minds in one head drives Rumplestiltskin to insanity. Zelena, now in possession of Rumple's dagger, orders him to kill Belle, but Lumière has a flash of conscience and uses a tendril of fire to ensnare the witch, giving Belle enough time to grab him and run away, deeply saddened. ("Quiet Minds")

We are shown an overview of the Enchanted Forest as is stands in the present day, before being taken to a round seal on the woodland floor that we know to be the Vault of the Dark One. It opens suddenly, and inky blackness begins to pour into its center. It isn't long before a form starts to rise from it, and soon enough Emma Swan is standing atop the re-sealed vault, having formed from darkness, dressed in a set of unfamiliar grey robes. She is deeply confused, wanting to know where she is, and quickly becomes alarmed when she hears the sound of someone whistling behind her. She demands to know who's there, removing her hood as she turns around - Rumplestiltskin, in all his former glory, stands to greet her, much to her surprise. The new Dark One recalls that he's supposed to be in Storybrooke in a coma, to which Rumple replies, "Yes, I am. Or rather, he is." Puzzled by the implications of this, Emma asks what he is, and he explains that he is many things: he is the voice in her head; the Dark One's powers inside her; inside all the Dark Ones, of which Rumplestiltskin is but one of many. ("The Dark Swan")

Retrieved from "https://onceuponatimeabc.fandom.com/wiki/Vault_of_the_Dark_One?oldid=113245"
Community content is available under CC-BY-SA unless otherwise noted.