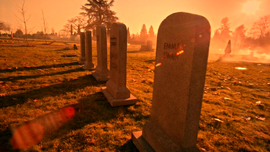 The Underworld gravestones are tombstones kept in the Underworld's graveyard. They were created by Hades in order to track the status of the residents within his realm; if a stone is stood up, they're in town. If a stone is tipped over, they've moved on. And if a stone is cracked, they're in some place worse. Hades creates gravestones for the heroes when they arrive to resurrect Hook, putting their names on them, trapping them.

Upon arriving in the Underworld to resurrect Hook Emma is some Ale of Sinead by Rumplestiltskin. She takes it to Hook's grave so that she can locate and communicate with him. However, she only sees a weak vision of her lover, who has been beaten badly, and he's unable to respond. Regina later uses the ale on her father's grave. She apologises to him for everything and he forgives her. ("Souls of the Departed") While searching for Hook, Snow stops to look at some of the gravestones, feeling guilty that some of them are there because she was unable to protect them in the Enchanted Forest. She later comes across Hercules' gravestone, which shocks her because she had no idea he's passed away. After Hercules moves on with Megara, an angry Hades creates three blank gravestones and tells Hook to chisel three of his friends names into them...forcing them to be trapped in the Underworld. ("Labor of Love")

Regina talks to Cruella De Vil about the gravestones, and she reveals that if the stone is stood upright then the person is still in town, if the stone is tipped over then they've moved on, and if the stone is cracked then they're in some place worse. Regina later goes searching for Daniel's grave, and to her comfort, she discovers that he's moved on. Later, after Hook refuses to chisel names into the stones, the group discover Hades has chosen Emma, Snow and Regina for him. ("Devil's Due") Emma has a dream about using a spell to erase the names from the gravestones, but a cyclone hits and her mother is attacked by a beast. She decides to give this a try when she wakes up, but when her dream seems to come true she gives up and takes shelter. ("Her Handsome Hero") After Dorothy is put under a sleeping curse, the heroes seek out her aunt, Emily Brown in the Underworld. After finding her gravestone, they discuss letting Snow and David leave to return home to their son, but she reminds them she's trapped so tells David to go alone. After Hades condemns Emily to the River of Lost Souls, her gravestone cracks. Meanwhile, under David's request, Hook scratches out Snow's name and replaces it with her husband's, meaning that she can leave for her son. ("Ruby Slippers") Unamused by Hook switching Snow and David's names, he decides as punishment to put everyone's names on a gravestone. ("Sisters") After Zelena is kidnapped by Rumple and Pan, Emma helps Hades rescue her. In return for this favor, he wipes all of the names off of the gravestones, meaning everyone is free to leave the Underworld. ("Firebird")

Retrieved from "https://onceuponatimeabc.fandom.com/wiki/Underworld_gravestones?oldid=99837"
Community content is available under CC-BY-SA unless otherwise noted.