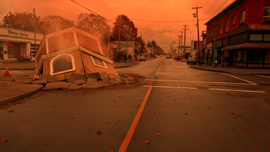 While Zeus, the most powerful God, rules Mount Olympus, he leaves the task of manning the decaying Underworld to his jealous younger brother, Hades. To make matters worse, he stops Hades' heart, committing him to the job and making it so that he cannot leave until his heart is restarted by a kiss of true love. Hades quickly becomes corrupt, harassing the souls and doing his best to make sure they don't leave his company and, after a brief love affair with Zelena, the Wicked Witch of the West, he remodels the entire land to resemble Storybrooke, Maine – the town ruled over by the witch's sister Regina, of whom she is very jealous. ("Our Decay")

When Cora's abandoned daughter Zelena starts causing problems for the heroes, the Wicked Witch's half sister Regina decides that the only way they're going to be able to defeat her is if they learn as much about her as possible. As such, she decides to contact her mother from beyond the grave. She prepares a seance with the others, which requires the deceased's murder weapon – in this instance, the enchanted candle – and murderer – in this instance, Snow White. The portal to the afterlife soon opens and Regina tries asking Cora about Zelena, but the portal closes before anything can come through... or so they think. Cora's ghost begins haunting Regina's house and only leaves once she's infused Snow with the memories of Zelena's origins. She then returns to the Underworld. ("Bleeding Through")

When defeating King Arthur and Zelena, winning over DunBroch's loyalty and finally being crowned Queen, Merida is gifted a magical ale by the Witch, giving her the ability to communicate with her deceased father, whose soul spends the rest of eternity down in the Underworld. She is able to do this with the legendary Ale of Sinead, which she must pour over her father's grave in order to summon him. When he appears, he jokes that she should stop pouring because she's wasting good ale, and the two of them share a tearful reunion. Fergus is proud of what his daughter has accomplished, and they exchange a heartfelt goodbye. It ends in a hug which itself ends with Fergus fading away, returning to the afterlife. ("The Bear King")

Due to not paying the price of magic back in Camelot, Regina risks losing Robin Hood forever when a fury arrives in Storybrooke to claim his life. She works to stop the demon, and with the help of Mary Margaret, David, and Leroy, she is able to stop it from sucking out Robin's life energy, sending it and the Charon who waits in the town pond nearby, on their way. ("The Price") Hook, who has come to realize Emma made him a Dark One back in Camelot, gives into his dark urges and starts plotting to snuff out the light. He goes to the Storybrooke pond, and there, summons a portal to the Underworld, thus allowing the Charon to bring all the other deceased Dark Ones to town so they can help him with his plan. ("Broken Heart") The Dark Ones mark the heroes so as to trade places with them when Charon returns, but Hook ends up absorbing them into Excalibur and making Emma sacrifice him using the magical sword. This makes it so that his soul and his soul alone is sent to the Underworld, as opposed to theirs, but Emma wants to go there in order to rescue him when she learns that he died in vain. As such, she, Regina, Mary Margaret, David, Henry, Robin and Mr. Gold all head there via the pond, with the latter's blood being the only thing able to open the portal from the land of the living. ("Swan Song")

The heroes arrive in the Underworld and are shocked to discover that it looks just like Storybrooke, only demented. As they search for Hook, interacting with various lost souls and eventually discovering that he's in a worse place, Regina finds her mother Cora who tells her to leave. However, Regina takes her father's advice instead and decides to stay and help her friends; as it turns out, him helping her redeem herself was part of his unfinished business, and he's able to ascend Mount Olympus. The fallen clock ticks to signify his soul moving on. Hades, whose lair is beneath the library, isn't happy about this one bit and punishes Cora for her failure by making her into a miller's daughter forevermore. ("Souls of the Departed") Mary Margaret tries getting Hercules to help and together they defeat Cerberus, allowing the latter to move on. It also allows Mary Margaret to realize she wants to be Snow White again. Hades tells Hook that for every soul his friends save, one of them has to stay behind. ("Labor of Love") When Hook can't make his mind up, Hades threatens him with the River of Lost Souls. Emma saves him in time, but Milah is less lucky, tossed into the river by Rumple at Hades' behest. Rumple is then goaded into serving Hades due to a contract stating that the latter owns the Dark One's second born... who is on the way. Meanwhile, Regina sees Daniel's grave and regains her magic but it can't remove Emma's heart – because Emma, Regina and Snow's names have been carved onto graves in the cemetery. They're stuck there. ("Devil's Due")

Hook reunites with his brother Liam, who is eventually able to move on with the rest of his crew when he comes to terms with what he did in the past. The book is discovered in the Sorcerer's mansion, but Hades' story is ripped out, and Henry decides to use the magic quill to uncover it, instead of resurrecting Cruella De Vil. ("The Brothers Jones") Hades has Gold make a portal to bring Baby Hood to the Underworld, but it ends up bringing Belle and Zelena as well. Rumple comes out to his wife as the Dark One while Zelena tries to keep a hold of her child, but ultimately gives her to Regina for protection. David and Snow use a haunting booth to get a message to their son Prince Neal, and Hades reveals that the reason the Underworld looks like Storybrooke is because he wanted Zelena to have everything Regina had. ("Our Decay") Hades sends Gaston after Rumple but it's Belle who ends up throwing him into the River of Lost Souls, thus killing hope in the Underworld and making the new flowers unable to grow. Emma has a bad dream that she thinks means one thing, but really it means that she has to help Ruby who is discovered in the woods. ("Her Handsome Hero") Ruby came to the Underworld looking for Zelena, who fails to escape using the silver slippers. She hands them over and Ruby is eventually able to use them to leave along with Snow – whose name is scratched off her grave and replaced with David's so that she can go back to Storybrooke and be with Neal, for she worries after Hades orders all the haunting booths to be destroyed. Meanwhile, Zelena decides to give Hades a chance and Belle puts herself under a sleeping curse to halt her pregnancy. ("Ruby Slippers")

James and Cruella hatch a scheme to kidnap Baby Hood, but the former ends up tossed in the River of Lost Souls by his brother. Meanwhile, Zelena goes on a date with Hades – whose put everyone's names on gravestones now – and Regina doesn't like it. Regina and Cora try to put a stop to things which ends in the two sisters making amends, and Cora moving on. In penance for giving Belle a sleeping curse, Gold uses his father Peter Pan to kidnap Zelena. ("Sisters") Hades tears up the contract to get Zelena back and a kiss of true love restores his heart and allows a portal to Storybrooke to open. Thanks to Emma's help, he removes everyone's names from their gravestones. Emma quests to resurrect Hook properly but it ultimately fails and she has to leave without him, along with everyone else. Hades tries making sure the others have to stay behind but he fails, as does Pan in his mission to return to life because Rumple condemns him to the River of Lost Souls before leaving with Belle. Henry leaves behind pages telling people their unfinished business so that they can move on in the heroes' absence. ("Firebird") King Arthur ends up in the Underworld after dying and is met by Hook, who invites him on a quest to find the pages detailing Hades' past so that they can decipher a way to defeat him. They discover the pages, but need the storybook to send them to Emma, which is across the River of Souls. Hook rescues Arthur from a stray soul – the rules are changing with Hades gone – but still manages to get the book and transfer the pages to the one in Storybrooke. Hades is successfully defeated as a result, and Hook is rewarded by getting resurrected. Arthur, meanwhile, decides to stay in the Underworld and rule over it, finally realizing that this is the broken kingdom he was always prophesied to repair. ("Last Rites")

Retrieved from "https://onceuponatimeabc.fandom.com/wiki/Underworld?oldid=113343"
Community content is available under CC-BY-SA unless otherwise noted.