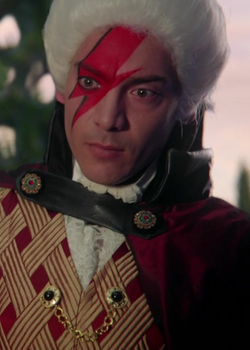 Tweedledee is a minor supporting character on Once Upon a Time in Wonderland. One of the Red Queen's servants, serving her alongside his brother, Tweedledum, they both perform a wide range of tasks, from washing her feet to protecting the queen and acting as her personal guards. However, unbeknownst to the Queen, Tweedledee is also assisting Jafar...

A younger Anastasia watches in her castle as men set up for an upcoming event. The soon-to-be Queen is approached by two men in white-powdery wigs, who later become the Tweedles she has in the present day. "Milady," exclaims one, causing Ana to turn around and look up. The two bow for her; she states that she didn't see them there and that she's sorry. There's a moment of awkward silence before the soon-to-be Queen asks who they are, to which another replies they're her Tweedles. "My Tweedles?" Anastasia asks, confused, but laughs anyway. "At your service," the one who goes onto be known as Tweedledum replies, causing him and his brother, Tweedledee, to once again bow. Anastasia asks what their names are, but Tweedledee reveals a servant does not have a name, as they're defined by the work they do. Tweedledum looks up, as if remembering something, and asks if they should prepare the tea for her arrival. "For whose arrival?" the soon-to-be Queen asks, causing the two Tweedles to point behind her. She turns and sees none other than the Queen of Hearts approach her, exclaiming, "Hello, Anastasia." Ana bows at the sight of one of Wonderland's other known rulers, and welcomes her into her castle. The Queen of Hearts, Cora, however, states that tomorrow is Anastasia's wedding day and she is to be Queen of the castle they are currently in, so it is her who should be the one differing. As Cora begins walking, Anastasia turns to her Tweedles, impressed, but then quickly hurries so she walks alongside the Queen; the Tweedles follow. ("Heart of the Matter")

When Alice returns to Wonderland with Will and the White Rabbit, hey immediately find themselves in a sticky situation; quite literally. The two amateur portal jumpers land in a mallowmarsh and begin sinking. A worried White Rabbit runs off to get help for them. He runs down a seemingly quiet road in Wonderland, but he soon stops when he comes across something terrifying to him; the Red Queen's royal carriage. Tweedledee and Tweedledum, who are both dressed in masquerade styled clothes and are both presumably working for the Red Queen as slaves under a threat, open the door and accompany her majesty off the carriage so she can meet with the rabbit. Another guard apprehends the rabbit and the Red Queen approaches him, with Tweedledee and Tweedledum by her side. She angrily tells the rabbit that he's late, to which he responds that he came as fast as he could. The party then take him back to the queen's palace, where it is revealed that the White Rabbit is working for the queen under threat of death, and he brought Alice back to Wonderland per her request. ("Down the Rabbit Hole")

At the Red Queen’s palace, the Red Queen is sat on her throne listening to a group of peasants explain their issues to her while Tweedledee and Tweedledum stand in front of her, trying to regain order. Tweedledee attempts to calm down the angry crowd by telling them to talk one at a time, however this doesn't work, so Tweedledum announces that the queen demands order. The crows still doesn't quieten down, so the Red Queen snarls that their problems bore her, angering them even more. However, everyone is suddenly frozen by magic, including Tweedledum and Tweedledee. The Red Queen realizes this is the doing of Jafar, and once she finds him, the two have a chat. Jafar ends up killing all the peasants by turning them into dust, and when Tweedledum and Tweedledee are released from their spell, they sweep up the remains. Later on, Tweedledum is scrubbing the Red Queen’s foot and Tweedledee is scrubbing her hands when the White Rabbit arrives to talk to her. They both stop attending to the queen and walk off, leaving the two in privacy. ("Trust Me")

Tweedledee and Tweedledum both attend to the Red Queen's jewellery, which she deems to be fabulous. Jafar then arrives for a meeting with the queen and the Red Queen tells the Tweedles to leave, which they both do. Later on, after the Red Queen captures Will, Tweedledee secretly tells Jafar of this. Jafar thanks Tweedledee for his help and asks to be reminded for a reward. With this information, Jafar demands that the queen execute the Knave of Hearts in public. Both the Tweedles are present, and before the execution takes place, Tweedledee notices that Alice has arrived. He then reports to Jafar and the Red Queen with this information. The Tweedles later witness Alice rescue Will from execution and escape with him. The duo meet up with the Lizard and attempt to escape, but they're stopped by Jafar. The Tweedles then witness as the sorcerer uses his magic on Will to force Alice into wishing. However, when he realizes she won't wish any more, he stops and turns Will into stone. When he leaves, Alice demands the Red Queen, whom she knows to be Anastasia, to bring him back, but she refuses and leaves with her servants. ("The Serpent")

Tweedledee, who is now clearly working under Jafar's ruling behind the Red Queen and Tweedledum's backs, is requested to find something for his new master. Once he finds it, he enters Jafar's lair, stating to his ruler that he has brought the item he requested, which he carries in a white bag. He pours the item out before Jafar, who watches eagerly, and once he sees Tweedledee has fulfilled his request, he signals for him to go. A nervous Tweedledee sticks around for a moment before rushing off, leaving Jafar and the item. The item is revealed to be the White Rabbit. Jafar questions and tortures the rabbit into finding out people who Alice may love she he can use them against her. After having his foot chopped off, the rabbit gives one name, but explains he's not in Wonderland. When Jafar asks the rabbit to take him to this person via portal, he attempts to run away. However he ends up getting caught and then the two travel through a portal. ("Heart of Stone")

Tweedledee accompanies the Red Queen to Jafar's castle when she goes in search of the powerful sorcerer. However, she's unable to find him and discovers the Cyrus has escaped from his cage. Tweedldee watches as the Red Queen tortures Jafar's Old Prisoner into revealing their locations. Later, the Red Queen, who is wearing more mobile clothing, is following Cyrus' tracks in the ground. She is followed by Tweedledee, who is holding her gown. She comments that all of Jafar's guards followed him so Tweedledee acts pleased, stating they'll have him apprehended in no time. The queen says that's exactly what they don't want, confusing the Tweedle. He tells her she cannot go after Cyrus alone as her outfit isn't befitting of a queen. An angered Red Queen slaps Tweedledee across the face and angrily tells him not to instruct her on what she can and can't do. She explains that everyone keeps underestimating her, adding that she wasn't always queen so she knows how to get her hands dirty. Tweedledee, who is in shock, agrees with his queen. The queen then explains that if she finds the genie then she alone will have him and his bottle; Jafar will have nothing and she will win the game. ("Who's Alice?")

As Tweedledum struts through the queen’s royal maze, he overhears from the grapevine that Cyrus has been captured in a trap in the forest. However, before he can go alert the Red Queen of this news, he notices his brother, Tweedledee, carrying something through the maze. Having not been seen, Tweedledum sneakily follows his brother to see what he’s up to and is horrified to see him secretly meet with Jafar. He watches as Tweedledee gives the sorcerer an item he requested, but is unable to see what it is. Tweedledum later tells the queen about Cyrus’ capture and then reluctantly betrays his brother and alerts the queen that he’s working with Jafar and he gave him something. The queen is furious and tells him to leave. She then discovers that the genie’s bottle she had hidden is gone…but it turns out to be a fake. Before the queen sets off to collect the real bottle and Cyrus, she leaves Jafar a present. She chops off Tweedledee’s head and gives it to Jafar in a box. Tweedledee tells Jafar that he thinks the queen is onto them, infuriating the sorcerer. ("Home")

Inside the royal palace, a red box rests on a stone column. Jafar approaches it and carries it to another table before opening it to reveal Tweedledee's alive head. With slight sadness Jafar says that the Tweedle was of great use to him so it's a shame he didn't come out ahead. With this, he picks up the head and places it on the stone column. Tweedledee thanks Jafar as his new position is much more comfortable. Jafar asks where he can find the Jabberwocky, horrifying Tweedledee, who wonders why he wants to know. Jafar roars that he asks the questions and then asks again where he can find it. Tweedledee says he'd be more than happy to help...but not having a body would make it impossible. With that, Jafar swings his serpent staff at one of his guards who is walking past, decapitating him instantly, "Anything is possible, Tweedle" the sorcerer smiles. As the headless body stands there, Jafar asks Tweedle if he'd like to be able to walk again. He says he would, so Jafar asks for help and in return he'll be helped. A scared Tweedle recalls that it took five-hundred of Wonderland's greatest sorcerers to imprison the Jabberwocky...so he begs that Jafar not do it. Jafar simply states that Tweeedledee's fear of facing the creature is what intrigues him so much. Jafar picks up Tweedle's head and begins to explain that there's something in Wonderland he wants...a genie, and he's become tired of hunting it, so with the threat of this creature he won't have to hunt any longer because everyone in Wonderland will want to bring it to him. As Jafar connects Tweedle's head to his new body, he states that Alice and her friends won't just be up against him...for they'll be up against everyone. ("Nothing to Fear")

Retrieved from "https://onceuponatimeabc.fandom.com/wiki/Tweedledee?oldid=84823"
Community content is available under CC-BY-SA unless otherwise noted.