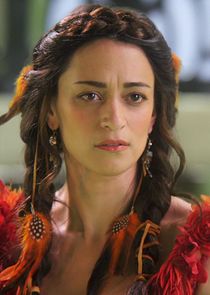 Tiger Lily is a minor character on Once Upon a Time.

A child destined to be the savior is born to Malcolm and Fiona, and so Tiger Lily - this boy's fairy godmother - goes to the scene of his birth alongside her superior, the Blue Fairy, so that the two of them may deliver the prophecy to the parents together. However, when Tiger Lily allows Fiona to read the full prophecy, which states that her son will one day face a great evil and die as a result in a final battle, she grows terrified, aiming a sword at the fairy one time when she startles her. Tiger Lily is merely there to deliver more fairy lore, noting that Fiona knows more of it now than most fairies, and that's how Fiona is able to take Tiger's wand and use it to turn herself into a fairy, believing that she will therefore be able to protect her son. She goes around with Tiger that winter checking on every baby born, for the one destined to be the great evil should bear a mark like a crescent moon. The child is not found, and so Fiona fashions a new spell from two ancient ones, one which shall rip every child from the land - to be sure - and deliver them to a land without magic where they will no longer be a threat. Tiger Lily is disgusted, naming this a Dark Curse, and cannot let Fiona enact it, and so Fiona takes Tiger's heart, and this dark act transforms her into the Black Fairy. She now bears a crescent moon scar, and Tiger points out that evil was not born this winter... it was made. Fiona and her son are one day destined to destroy each other. Blue shows up and restores Tiger's heart, and Tiger believes there to be a way to save Fiona from her fate. Using the Shears of Destiny, she can change the future by severing herself from her powers, but Fiona thinks she needs her powers to protect her son, and so she severs him from his power instead and makes him no longer the savior. Disgusted, Blue banishes her to the Dark Realm, and she and Tiger Lily deliver this now normal baby back to Malcolm. He blames the child for ruining his wife, and so gives him the "perfect" name out of spite: Rumplestiltskin. ("The Black Fairy") Tiger Lily hates herself for not having prevented Fiona's turn to darkness, and so she gives up her wings and goes to reside in Neverland out of shame. ("Awake")

When Captain Hook inadvertently returns to Neverland after Pan's death and is hunted by the remaining Lost Boys, Tiger Lily shows up and knocks out all his pursuers with blow darts. He thanks her for the rescue, only for her to point out that it isn't one, and then she lunges a dart directly into his throat and kidnaps him back to her cave, where he awakens tied up. She explains that she needs a favor from him, believing him to still be captain of the fastest ship on the sea, but she points out that she could have just asked. She didn't want to get "no" for an answer though, and presents him with part of the wand which was used to banish the Black Fairy. She needs it delivered to the savior who, Hook reveals, is the woman he intends to marry, with Tiger having been skeptical previously about the idea of Killian Jones having fallen in love. He proves it by showing her the engagement ring he purchased, and Tiger smiles, but Hook can't create a portal home to her due to a curse on him. As such, he'll need to rip off his shadow with some magic sap at Pan's camp, which is overrun by Lost Boys. After sharing some of her past with him, Tiger Lily creates a distraction while Hook cuts off his shadow and gets it to deliver the wand to Emma Swan, with that being her only hope of defeating the Black Fairy. He, meanwhile, is tied to a pyre, while Tiger Lily is captured. But, Emma soon rescues her love using pixie magic and takes him back home, and Tiger Lily uses the distraction to her advantage and escapes the Lost Boys successfully. ("Awake")

Retrieved from "https://onceuponatimeabc.fandom.com/wiki/Tiger_Lily?oldid=113483"
Community content is available under CC-BY-SA unless otherwise noted.