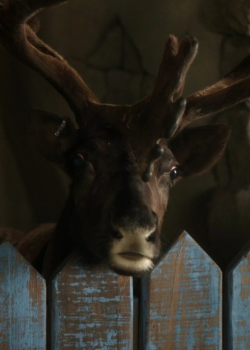 Sven is a minor supporting character on Once Upon a Time. He is the reindeer pet that belongs to Kristoff, who is more than just a pet to him. The two share a special "buddy" bond and they can seemingly communicate despite the difference in species. Sven is shown to be sassy and witty, often mocking Kristoff in social situations.

When Anna goes missing the day before her wedding to Kristoff, Elsa visits he and Sven hoping to find some answers. Initially trying to cover for his fiancée, Kristoff soon finds himself admitting that Anna left on a boat to Misthaven in order to find out what it is her and Elsa's parents were doing when they died. Elsa heads to the docks in order to stop her, and Sven tries to stop Kristoff from following, but he does, and Elsa is too late to stop her sister. She worries that Anna will act before she thinks and worries further because she doesn't know a thing about this Misthaven, which Kristoff tells her is locally known as the Enchanted Forest. ("A Tale of Two Sisters")

Kristoff rides through the woods, quietly in the night, atop of his reindeer, Sven. "I am doing what Elsa said," Kristoff says to his reindeer. The animal grunts. "Well, the spirit of it anyway," the ice merchant corrects. Sven looks up at his owner, who finally breaks down, admitting that he is disobeying his queen, "but she'll be glad, Sven, you'll see. She just doesn't know it yet." Kristoff hops off of his reindeer, telling him to stay put. Kristoff makes his way through some bushes where he discovers a camp set up. "Wow, he wasn't exaggerating, he really does have twelve brothers," Kristoff says to himself. After spying on Hans and his brothers and discovering that they're going in search of a magical urn that can trap magical people, Kristoff and Sven had back to the palace so the former can report back to Elsa. ("Rocky Road")

Kristoff is feeding Sven when Anna suddenly enters the stables behind him, much to his shock and joy. They reunite by embracing but she soon backs away; he assures her that he's bad a bath and she assures him in turn that he smells lovely (which an unbelieving Sven confirms by sniffing the air). He wonders how her mission went, leading her to sadly explain that she discovered the real reason that her and Elsa's parents went to the Enchanted Forest and it's because they wanted to find a cure for Elsa's magic, thus confirming that they actually did fear her. Kristoff says that that's bad, which Anna exaggerates, saying that the world might as well just end right now. She laments over the fact that she'll eventually have to break this news to Elsa, and doesn't know how to go about it. ("The Apprentice")

Once meeting the Snow Queen, her newly reunited aunt, Anna visits Kristoff in Sven's stables, sharing her doubts about the woman's authenticity. Kristoff sees nothing wrong with Ingrid, as she and Elsa seem to share many characteristics. Anna, however, continues to believe something is off. She then makes plans to see Grand Pabbie, hopefully get the answers she's looking for, so Kristoff agrees to cover for her and watch over Elsa. He also speaks with his fiancée about her decision to withhold the truth about what the former Queen and King did in the Enchanted Forest. Anna assures Kristoff that she plans on telling Elsa when the time is right. Throughout all of this, Sven's antlers get in the way as the couple converse. As their conversation wraps up, the couple share a kiss, and Anna exits the stables. Unbeknownst to them, however, the Snow Queen has been listening to the entire conversation. ("Family Business")

1/3
Community content is available under CC-BY-SA unless otherwise noted.
Advertisement