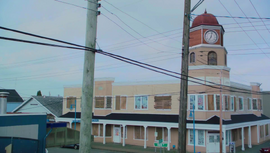 The clock tower is a landmark within the town, and didn't move for the first 28 years in which the Dark Curse was active, until Emma Swan came to town and time began to move forward again. When Emma decided to stay in Storybrooke, the clock ticked, much to Henry's delight, and moved from 8:15 to 8:16. It resides in the center of the town and beneath it is the Storybrooke Library, which was closed for many many years, until Belle decided to be the town's librarian. This is because, beneath the library, is an extensive cave that can be accessed via a mechanical elevator, which Regina chose to hide a few keepsakes from the land that was, including the curse's fail-safe which was capable of destroying the town and killing all of its residents. This cave was guarded by Regina's old friend Maleficent in her dragon form, and a spell around it sustained the sorceress' life in whatever magical façade she chose to put on.

Retrieved from "https://onceuponatimeabc.fandom.com/wiki/Storybrooke_Free_Public_Library?oldid=112274"
Community content is available under CC-BY-SA unless otherwise noted.