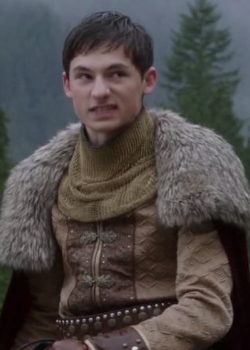 Sir Henry is a minor character on Once Upon a Time.

When the Evil Queen wishes for Emma to have never been the savior, the latter finds herself transported to a wish realm wherein she grew up a coddled princess, for the Dark Curse was never cast. In this world, Henry is an aspiring knight, and he turns up late for his mother's birthday ceremony for he was too busy practicing for his knighting the next day. He finds his mother with a sword and thinks it is a present for him, for tomorrow, and begins acting the part of a noble knight. This leads him to wish that his father was still around to see him, but Emma assures that he is watching over him always. The next day, Henry's knighting ceremony commences, but it is interrupted by Regina, who has wished herself into this realm to rescue Emma and now must remind her of the savior she truly is. To do this, she plays the part of the villain, acting like the Evil Queen everyone thinks she is and kidnapping Queen Snow and King David. Henry wonders what he and his mother are to do, but she assures him that she's got this, heading on over to the Queen's Dark Palace and surrendering to her by offering the key to her parents' kingdom. Regina is appalled that Emma won't fight for their lives, even going as far as to crush their hearts, at which point Henry arrives - sword in tow - to avenge his grandparents. He throws the sword at Regina, but seeing him about to become a killer is what finally wakes Emma up, and she stops him with her magic. She then takes the sword back and grows intent on finding a way back to reality with her friend. ("Wish You Were Here")

Emma and Regina lose their chance of returning to Storybrooke when the magic bean portal they open by the lake closes before they have a chance to go through it, thanks to a surprise encounter with Robin of Locksley. This means that the two of them remain stranded in the wish realm until they can find another way back, while Sir Henry becomes unfrozen and grows intent on both finding his mother - whom he believes to be kidnapped - and on finding Regina - on whom he wishes to claim vengeance for his grandparents' deaths. Summoning up a small army of knights, he leads a search party, arriving at the lake on horseback not long after Robin has fled. Emma and Regina are forced to hide behind a tree while this otherworldly version of their son angrily orders his knights about, thirsty for justice. Once he's moved on, the tree they're hiding behind gives Emma the idea to return home via magic wardrobe. ("Tougher Than the Rest") Robin of Locksley returns to the wish realm where he and the serum version of the Evil Queen come to live out a happy ending together; however, Henry and the rest of the realms' folks believe she's responsible for the death of Queen Snow and King David. As such, the Queen and Robin are forced to flee to the Enchanted Forest. ("The Final Battle, Part 1")

Retrieved from "https://onceuponatimeabc.fandom.com/wiki/Sir_Henry?oldid=108343"
Community content is available under CC-BY-SA unless otherwise noted.