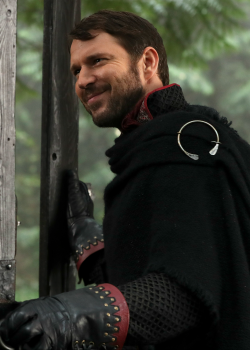 The Sheriff of Nottingham is an episodic character on Once Upon a Time.

When the Evil Queen wishes for Emma Swan to have never been the savior, the latter finds herself transported to a wish realm where the Dark Curse was never cast. In this version of events, Robin Hood remains Robin of Locksley, who doesn't steal from the rich to give to the poor - instead, he steals from the rich to make himself rich, and of course this world's version of the Sheriff of Nottingham remains as intent as ever on imprisoning him. He gets his chance when Regina goes to find Robin at a tavern to find out how happy he is, and clears it out thanks to everyone believing her to be the Evil Queen of this realm. Nottingham then shows up with his men, and slaps Regina with a cuff which inhibits her magic, meaning he can take her as prisoner as well as the man he's been seeking so desperately for all this time. The two of them are hauled off into a cage, but then Rumplestiltskin - who has his own score to settle with Regina - shows up to liberate them, spooking the Sheriff's horses and me. The Sheriff himself finds himself clinging to the bars of the cage, begging for help, before being dragged back by Rumple's magic which sends him flying off into the woods, never to be seen again. ("Tougher Than the Rest")

1 of 3
Add photo
Retrieved from "https://onceuponatimeabc.fandom.com/wiki/Sheriff_of_Nottingham_(Wish_Realm)?oldid=104426"
Community content is available under CC-BY-SA unless otherwise noted.