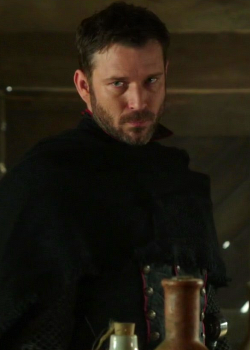 After Robin Hood is annihilated by Hades, a new version of him - known simply as Robin of Locksley - is found in a wish realm by Regina, who decides to bring him back to Storybrooke. Keith hears word that he's back, while Robin also discovers that his nemesis, the Sheriff of Nottingham, is in town, and so he goes looking for him with malicious intentions. Keith is strolling down Main Street with a coffee in tow when suddenly an arrow is launched into his cuff, trapping him. Robin then tackles him to the ground and holds a knife to his throat. Nottingham tries profusely to defend himself, mainly with words, while Robin just prattles on about how he could have killed him with the arrow but felt that, given their history, this should be a little more personal. Soon, however, Regina shows up and, not wanting the new version of her true love to be a murderer, she uses her magic to transport Nottingham somewhere safe. ("Murder Most Foul")