Start a Wiki
Shears of Destiny 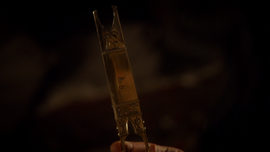 The Shears of Destiny is a powerful tool, once possessed by the Three Fates, giving someone the ability to severe the ties to their own destiny. Most notably, they're used so that the Savior can escape their fate of death, having been used on both Rumplestiltskin and Aladdin.

The Shears of Destiny were once in the possession of the Three Fates, having the power to severe the ties of one's own destiny. ("Street Rats") Eventually, the shears wind up in the possession of the fairies and are kept in their sacred vault. When Fiona learns that she and her infant son, the Savior, are destined to battle and kill each other, Tiger Lily makes one last ditch effort in stopping Fiona from giving into darkness by handing over the shears and suggesting she cut away her magic to prevent herself from becoming the great evil her son is meant to defeat. Fiona can't bring herself to do this though, believing she needs her power to protect her son, and so she uses the shears on him instead to cut his ties of being the Savior. As punishment, the Blue Fairy banishes Fiona to another realm. ("The Black Fairy") The Shears of Destiny wind up in the possession of Jafar, who hands them over to the current Savior Aladdin as a means of cutting away his ties, with him now knowing that he is fated to die. Aladdin initially rejects the shears, but winds up keeping them in his possession until ultimately using them before fleeing from Agrabah to the Enchanted Forest. ("Street Rats")

Retrieved from "https://onceuponatimeabc.fandom.com/wiki/Shears_of_Destiny?oldid=108023"
Community content is available under CC-BY-SA unless otherwise noted.