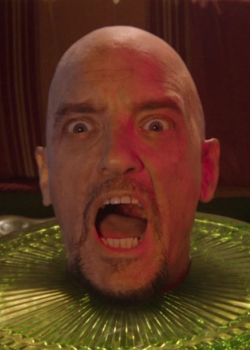 The Screaming Head used to belong to an unnamed man, but now acts as an ornament for the Caterpillar.

Will asks where the knot is and he learns it's with the Grendel. The Caterpillar says he thinks the Grendel still eats and lives in the Whispering Woods before wishing them luck. Will realizes the Caterpillar wants him to fail, but the insect says he doesn't care as all outcomes favour him; he succeeds and he gets the knot, he dies trying, or he gets the knot and keeps it for himself. Will asks how the last one favour him, so the Caterpillar explains he'll get to exact the revenge on him that he's been waiting so long for. He adds when he's done, he'll not only possess the knot, but he'll possess Will too. Will is confused, as he thought the Caterpillar wanted him dead. The insect tells him there are fates worse than death before lifting up a golden lid on a plate. A screaming man's head is revealed and then the Caterpillar smiles, saying he could always use another pretty face on his desk. A disturbed Alice looks over to a worried knave. ("Forget Me Not")

Retrieved from "https://onceuponatimeabc.fandom.com/wiki/Screaming_Head?oldid=84847"
Community content is available under CC-BY-SA unless otherwise noted.