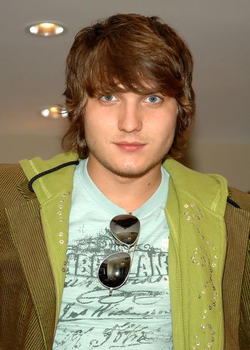 Scott Michael Foster is one of the supporting actors of Once Upon a Time, portraying the role of Kristoff.

Foster was born in Winfield, Illinois, at Central DuPage Hospital. He later moved to Highland Village, Texas, a suburb of Dallas, where he became interested in acting as early as elementary school. He went to Briarhill Middle School, and later attended Edward S. Marcus High School where he was involved in theater until he graduated in 2003. He participated in Father of the Bride his freshman year. He attended Collin College for one semester with a focus on acting, but soon left his studies to pursue a professional career in that field. He is the only boy in his family and has two sisters.

He plays guitar and is the lead singer of his indie rock band "Siren's Eye". They released their first EP on iTunes, entitled "Red Room" on 15 December 2009.

Foster moved to Los Angeles, California, where he signed up for background work whenever he could. A representative from the same agency that represented Jerry Seinfeld came to Foster's acting class and signed him 6 months later. He did commercials and voice-acting. He was in smaller films like Forever Charlie, he also was part of a film project called Quarterlife where he played a character named Jed, before receiving a major role in Greek. In April 2011, Foster guest-starred on NBC's Parenthood.

1 of 35
Add photo
Retrieved from "https://onceuponatimeabc.fandom.com/wiki/Scott_Michael_Foster?oldid=86664"
Community content is available under CC-BY-SA unless otherwise noted.