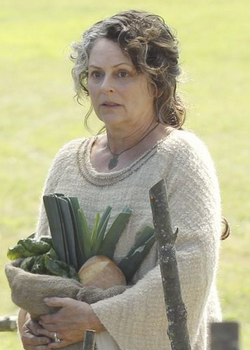 Ruth is a supporting character on Once Upon a Time. She was Prince Charming's doting and loving mother. A simple woman from a humble background, Ruth and her husband's poverty drove them to make a deal with the fearsome Rumplestiltskin, resulting in them giving him one of their newborn twin sons, who was in turn given to King George. The other son grew up to become known as Prince Charming, and found love in the heart of Snow White. However, before he could introduce her to his mother, Ruth fell victim to a stray arrow during an attack and ultimately perished, sacrificing herself in lieu of her son being able to have a child.

Ruth marries a shepherd named Robert and the two of them have a pair of twin boys. Unfortunately, both David and James fall ill right before winter and, since their sheep farm is failing, the married couple can't afford to medicate them. Then, one stormy night, the Dark One Rumplestiltskin appears in their home, offering them a sack of gold with which they'd be able to save their sons, but Robert makes clear that they have nothing to give him for it. It's then that Rumple tells them a story, about how the rich King George and his wife can't conceive a child - and yet here a pair of poor shepherds are with two. He wants to take one for George, making clear that Robert and Ruth can either have one child who survives the winter, or two who don't. Knowing they won't want to have to decide, he has Robert flip a coin, and it comes up tails, meaning James is taken to become the King's son and the two shepherds devote themselves to raising David. However, six years later and Robert is the local drunk, blowing his money on tavern ale. One day, King George comes into the tavern to reveal that his son, James, has been abducted, and something about that taps into Robert's paternal instincts. He knows he must save James, even though his wife thinks he's crazy, and he tells David he's going on a supply run. David gives him is lucky coin - the same one which decided his fate as a baby - to keep him safe. It doesn't work, though, for Ruth soon hears word that her husband died after drunkenly crashing his cart into a ravine... unaware of the fact that he was in fact murdered. ("Murder Most Foul")

Anna, the princess of Arendelle, adopts the alias of Joan and heads over to David and Ruth's farm, knowing them to be trustworthy because her fiancé, Kristoff, is a good friend of the former. She seeks his help on her secret mission, but she is soon interrupted when Bo Peep, the local warlord, stops by the bully the two shepherds. She tells them to pay them what they owe her or else she will take their farm and force them to work off their debt as slaves. She then "brands" them with her magical shepherd's crook to make sure they are never able to escape, saying that David's father's horse should buy them an extra day. Not liking this one bit, Anna trains David how to fight with swords and he is successfully able to beat Bo Peep and her bodyguards in a fight, winning he and his mother their freedom. Having been given David's horse, Anna sets off on her journey, but before she does, Ruth tells her of a powerful wizard who might be able to help her with what she's doing: Rumplestiltskin. The young princess leaves to find the Dark One. ("White Out")

David sets out with Wilby, his and Ruth's trusty sheepdog, to track down a lost lamb; however, they return without it, forced to reveal that it succumbed to the cold of the night. Ruth starts to fret that they can't build a flock this way, and thinks that it might be time to sell the farm. David is horrified by the notion, and Ruth assures that if they could afford it then she would never leave, but, the way things are going, she fears they may have no choice. Realizing that his mother is right, David packs up his things and decides to head, along with Wilby, to the nearby port town of Longbourne, in the hopes of being able to secure a buyer. Ruth wishes him luck in his journey; however, he ends up not having to sell the farm after all, for he's rewarded with money from a girl whose life he saves. This is enough to keep he and Ruth afloat for at least a while. ("Heartless")

Prince James, Ruth's given up son, is killed after promising to defend King Midas' kingdom from a dragon. At her farm, Ruth tells David, her son, that a girl in the village is available for marriage, however, David refuses to marry her as he only ever wants to get married for love, not for riches. Ruth understands and does not persist. Ruth and David are visited by King George's men and David is taken away to slay the dragon in James' place, so that King Midas does not notice. As a surprise to everyone, David actually slays the dragon himself, however, he is then introduced to Princess Abigail, whom King Midas wants him to marry. King George threatens to kill Ruth should David not go through with it. As such, he shows up at his mother's farm to explain to situation to her and exchange an incredibly tearful goodbye. She gifts him with her wedding ring, wanting him to give it to his future bride. ("The Shepherd")

When being attacked by King George's men, Charming (David) sends Snow White to the cabin where his mother is being kept, Snow begins to run but is kidnapped by Lancelot and taken to King George who drugs her with a potion which makes her infertile. Snow is thrown away but incapacitates Lancelot, he tells her he wants to help her and reveals that the king's men are on their way to kill Ruth. Ruth is decorating the cabin and Charming arrives, he tells her that it looks beautiful and she says she wants everything to be perfect when she meets her future daughter-in-law. Charming hears something and tells her to stay inside, she obliges and Charming battles off some knights, however, in the struggle, Ruth is hit in the chest by and arrow. Charming lowers her to the floor just as Snow and Lancelot arrives, the latter explains that the arrow is poisoned and Charming suggests going to Lake Nostos for a cure as its waters have powerful magical properties. Ruth is taken by wagon to the lake, and, in a pause, she shows Snow a necklace that can determine the sex of your first born by the way it swings, however, when used on Snow, it stays still. The girl explains George's curse and Ruth tells her to take some of the water from the lake herself to cure her, however, when they arrive, the lake is empty. Lancelot manages to find a morsel of water and goes to give it to Ruth who pretends to drink it, they are shocked when it does not work and Ruth's final request is to see her son's wedding, Lancelot marries Snow and Charming, and, Snow becomes fertile again when she drinks from the wedding cup which contains the real morsel of lake water. Ruth dies watching this and Charming buries her, he places a candle on her grave and Snow apologizes, saying that she was the only family her had left, he denies this, saying that he has her now. Snow figures out what Ruth and Lancelot did with the water after Ruth's necklace works the second time around, revealing that Snow's first child is to be a girl. ("Lady of the Lake")

1 of 6
Add photo
Retrieved from "https://onceuponatimeabc.fandom.com/wiki/Ruth?oldid=104795"
Community content is available under CC-BY-SA unless otherwise noted.