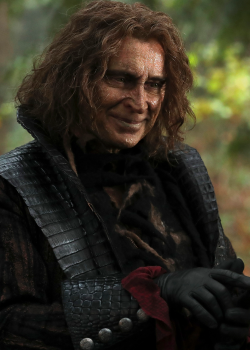 Rumplestiltskin is a minor character on Once Upon a Time.

When the Evil Queen wishes for Emma to have never been the savior, the latter finds herself transported to a wish realm where the Dark Curse was never cast. In this reality, Rumplestiltskin remains imprisoned, only now he is locked up in the Evil Queen's Dark Palace and more insane than ever before. Regina, who has wished herself into this reality in order to rescue her friend, discovers him there after having been mistaken for the Queen herself. He is intrigued by what she has to say about this being a fake world, initially offended by her presence due to her being both his greatest student and his greatest failure. The more they talk, the more he learns, and the more he sees the opportunity to strike a deal. He tells Regina that the reason Emma was the savior was because of her, because she had a villain to defeat, and so if she wants her to be the savior again then she's going to have to act like the Evil Queen. Regina likes this idea, but refuses to acknowledge the advice as part of a deal, pointing out that they're just old friends chatting. As such, he sweetens the pot with the offer of a magic bean, so that she and Emma can return home once all is sorted. Knowing she'll regret it, Regina decides to take him up on that, and agrees to meet him tomorrow at noon by the lake where he'll provide her with the bean - in exchange for his freedom. Rumple is overjoyed to be let out of his cage, convincing Regina to look more like an Evil Queen on his way out. The next day at noon, he shows up at the lake as promised with a bean in tow, with Emma having snapped out of her fantasy. She frets over the Dark One being loose, for he could cause all sorts of terror, and after delivering the bean he teleports off to go raze some fake villages. ("Wish You Were Here")

Now free, the first thing that the fake Rumple in fact sets out to do is find this world's version of Belle. However, thanks to her having been kidnapped by the Evil Queen, who has long since been defeated, all he's able to find is a pile of bones, with the poor maid having starved to death as a forgotten prisoner. Enraged, the Dark One then goes looking for Regina, needing someone to punish for this grave crime. He discovers her along with Robin of Locksley, the both of them having been captured by the Sheriff of Nottingham and locked up in a cart. To free them, Rumple spooks the sheriff's horses and men, then uses his magic to make the sheriff himself go flying, scared out of his mind, off into the woods. Regina is happy when Rumple emerges, believing him to be on her side, but then he drops the remnants of Belle's skeleton at her feet and points out that she fits the bill as being someone he can blame for her death - and he has an inkling that, real him or not, he still has the ability to make her bleed. With her magic being inhibited by a cuff, he's able to kidnap her and Robin back to his Dark Castle, saying how it's been a while since he's had a good flay and so his tools are a bit rusty. As he goes to retrieve them, however, Robin is able to escape the cell, and he and Regina ultimately escape the wish realm altogether along with Emma through a newly built magic wardrobe. ("Tougher Than the Rest")

1 of 6
Add photo
Retrieved from "https://onceuponatimeabc.fandom.com/wiki/Rumplestiltskin_(Wish_Realm)?oldid=112423"
Community content is available under CC-BY-SA unless otherwise noted.