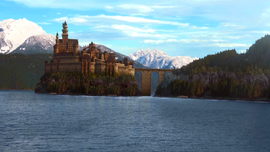 The Royal Castle is a large castle located atop of a large lake in the Enchanted Forest and was the residence of Prince Charming and Snow White, as well as Emma's birth place.

After returning to the Enchanted Forest, Snow and Emma meet Aurora and Mulan, and Snow is also reunited with her old friend, Lancelot. Snow requests that she and Emma go to her old castle so that they may travel to their old land through a wardrobe that sent Emma to Maine twenty-eight years previously. They finally make it to the castle after an ogre attack (one that Snow slays) and find the wardrobe. They are met there by Lancelot who seems to take interest in the wardrobe, and Snow wonders why. He says he just wants her to get back to her husband, and for Emma to get back to her son, Henry. At this, Snow pulls a sword on Lancelot, telling Emma that he is not who he says he is as there is only one person that she told Henry's name. Then, in a swirl of purple mist, Lancelot reveals himself to be Cora in disguise, the evil witch tells them that she killed Lancelot long ago and has been posing as him ever since. She tries to attack the two princesses so that she can make it through the wardrobe, however, Emma burns it down. ("Lady of the Lake")

Three months after being sent to the Enchanted Forest again, Prince Charming has an ominous dream one morning in which he enters the old nursery of the castle, looking just as it did before the Dark Curse struck, and in it he finds an adult Emma wearing a princess' ball gown, telling him about how she's nervous for the ball, her first, and how she wants him to teach her how to dance. Charming obliges and dances with his daughter, both with delight. He comments that she's a natural, just like her mother, and she says he's the best teacher a daughter could hope for. Their precious moment is ruined once the dream takes a dark turn, and Emma is sucked into the wardrobe, not before telling her father that this dream moment they shared couldn't happen for real because he failed her. As she is magically sucked by the sudden vortex, she tells him not to fail his next one. David wakes up to be told by his wife that they're pregnant... Fearing that he won't be a good father to his second child, Charming goes out on a quest for Night Root. ("The Tower")

Retrieved from "https://onceuponatimeabc.fandom.com/wiki/Royal_Castle?oldid=107774"
Community content is available under CC-BY-SA unless otherwise noted.