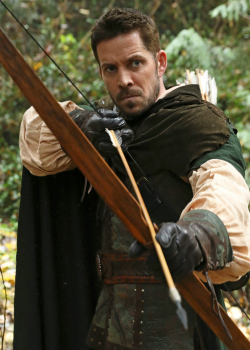 Robin of Locksley is a supporting character on Once Upon a Time. Having been created along with the rest of his realm by a wish from the Evil Queen, Robin showed up to terrorize Emma Swan and Regina Mills during an aborted attempt at escape - for in this land, unlike the other Robin Hood, he never stopped being a petty, common thief. But he was miserable, and so Regina brought him to Storybrooke so that he could start over. Robin hated the constant reminders of the other him, and realized he had no real interest in reforming, and so he jumped at the chance to return to his home world and embark on yet another fresh start with the woman who created it: the now reformed Evil Queen.

When the Evil Queen wishes for Emma to have never been the savior, the latter finds herself banished to a wish realm where the Queen was defeated long ago and the Dark Curse was never cast. Regina manages to follow Emma into this realm on a rogue rescue mission to snap her out of the fantasy she's now trapped in and, after a small series of attempts, she eventually succeeds in doing so. Now all the two ladies need is a way back to Storybrooke, and so they meet with this reality's version of Rumplestiltskin at the lake so that he may provide them with a magic bean before disappearing. Emma and Regina open a portal, but then an arrow flies overhead, and Robin Hood appears. He wants the two of them to remove their jewelry, this being a robbery, but Regina grows so distracted by his presence that she begins to step away from the portal and towards him. Knowing that the portal is about to close, Emma does her best to remind her friend that this Robin isn't real, merely an illusion created by the wish, but Regina can't seem to snap out of it. And so, the portal closes and the two are left stranded there, in the midst of a stick-up. ("Wish You Were Here")

Robin has Emma and Regina hand over their jewelry and, once he flees, Regina grows confused over the fact that he didn't seem to age as everyone else in the wish realm did. Later, when she gets it into her head that everyone in this place ended up better off once the Evil Queen was defeated, she needs to find out if the same is true for Robin. And so she tracks him down to the tavern where she was first fated to meet him, disheartened to hear how great his life is doing work that he adores, answering to no man and sleeping under the stars. He is curious as to why she cares so much about his happiness, but, before she can explain, the Sheriff of Nottingham comes to arrest them both. As they are captive in his prison cart, Regina learns that Robin is merely Robin of Locksley there, and he steals only for himself and not for the poor. He never married Marian, and so has never known love, and isn't truly happy as he had her believe. The two are then rescued by Rumplestiltskin... who has his own vendetta against Regina, and so they're taken captive yet again. Down in his dungeon, Robin is told all about the fact that he's a copy of the original, and he finds little trouble in believing that there's a happier version of him out there. And then he learns that this other version died. Being a great thief, he's able to bust he and Regina out of their cell and get her to her new portal home, through a magic wardrobe. He decides to hand her his lucky feather, which she takes a sign, having never received the one meant for her back in reality. She and Emma think maybe Robin's soul lives on through this version, and that's why he didn't age, and so they take him back to Storybrooke with them where he is welcomed by the heroes. ("Tougher Than the Rest")

Regina sets Robin up at her house and later decides to show him Henry's storybook, explaining how most of the people featured in it are there in town. He doesn't see any of her and Robin's story, figuring that it must be quite the tale, and Regina says that it is; however, before she can delve into it, the doorbell rings and she has to go answer it. When she returns, Robin is gone, having seen the Sheriff of Nottingham in the book. He realizes that Nottingham is in town and wants to kill him, hunting him down with his bow and arrow in tow and then even tackling him and holding a knife to his throat. Regina manages to find him before he commits himself to an act of murder and uses her magic to send Nottingham somewhere safe, to Robin's annoyance. She believes he would have regretted the dark act, while he believes that that's her Robin she's thinking of. They proceed to her vault so she can heal some wounds he sustained in the struggle and, looking around at all the evil stuff she has there, he points out what a hypocrite she seems. She acknowledges this, and also goes to reveal something she's been meaning to tell him - that he, or rather, the other Robin, has two children, one of whom is a baby daughter (had with her sister, Zelena) who's there in town. Robin wonders if Regina brought him there to drop him in the middle of this mess, but she argues she hoped she could give him a fresh start, as well as herself. They end up kissing, but it's a load of nothing, and Regina realizes that this really isn't her Robin at all, so she wonders who he is and what he wants. At the same time, Robin goes through her shady possessions, plucking out a box she earlier said was powerful and dangerous. ("Murder Most Foul")

Robin is busy rifling through Regina's stolen potion ingredients out in the woods when she discovers him, for he happened to go to the same spot where the old Robin used to come to think. He hides the ingredients before she sees, while she offers him an apology for trying to force him into being someone he's not, and he requests some time to clear his head. He proceeds to go to her wicked sister Zelena with the ingredients in tow, having pilfered from enough witches and warlocks to know the kind of stuff that's capable of breaking down a protection spell. He wants Zelena to help him so that they can escape Storybrooke together, for he only came to this realm to find more people to rob, more places to drink, more women to meet... all of which is impossible with Regina trying to reform him every step of the way. Understanding all too well, Zelena agrees to help, later meeting Robin at the town line with her baby, her suitcases and a caged snake in tow. However, Regina shows up as well, having figured everything out, and tells Robin to go ahead and try and leave because the potion Zelena made to break the protection spell won't work. Indeed it doesn't, and Regina assures that if there were a way to break it she'd have done it by now. Robin makes clear that he doesn't want to stay with her, for he can't possibly live up to the legacy of a man who died for her, and, coming to understand, she promises to help him find a way out of town after all. Later, Robin is bitten by that snake of Zelena's, which transforms back into its true self - Regina's doppelganger, the Evil Queen. She assures Robin that Storybrooke has more to offer than he might think, and, with clear malicious intent, she offers to show him what she means. ("Ill-Boding Patterns")

The Evil Queen grows offended when Robin suggests that the two of them are alike, both being doppelgangers of a more moral version, but the fact remains that neither of them belong there, and the Queen hopes to use Robin to help enact a new plot. She takes him to the cemetery and has him dig something up for her - the Shears of Destiny, capable of cutting one's ties to their fate. He understands that she wants to use them on Regina, and the Queen confirms that she hopes to finally separate herself from her "better half" so that she can kill her once and for all. In order to bait a trap, she uses enchanted rope to tie Robin up over at the mayoral office, with him not particularly liking the idea. She proceeds to write a note on page 23, which is a mysterious page left behind by the old Author which depicts Regina and Robin's apparently aborted happy ending. The note states that Robin of Locksley will die lest Regina face the Evil Queen one last time and, when Regina shows up to rescue him, the Queen uses her magic to make him poof away. She actually ends up keeping her word and uses the Apprentice's wand to send Robin back to where he belongs - back to the land she created with her wish. And, after Regina finds a way to redeem her dark self by imbuing her with some of her love, the Queen finds herself sent to this land as well in order to get a fresh start. She finds Robin drinking in the same tavern where he and Regina were originally fated to meet, and he seems surprised by her change of heart. She makes clear that being a villain didn't really work out for her, and offers to buy him a drink. Since this is his realm, however, he offers to get one for her, and the two of them embark on this fresh start together. ("Page 23")

1 of 38
Add photo
Retrieved from "https://onceuponatimeabc.fandom.com/wiki/Robin_of_Locksley?oldid=109029"
Community content is available under CC-BY-SA unless otherwise noted.