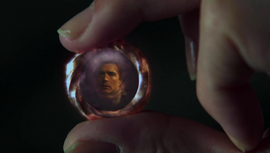 Regina's engagement ring is a piece of jewelry given to Regina by Daniel to represent their pending marriage. She attached it to a chain following his death, which seems to have vanished by the time it's Storybrooke following the Dark Curse, where Regina has imbued it with magic to show her true love's face. She is ultimately forced to sacrifice it to retrieve her poisoned apple.

When King Leopold proposes to Regina, she panics because she is already in love with her family's stable boy Daniel. They realize that the only way to be together is if they run away, and so he proposes to her using a ring, wanting to make their love official. However, just as they are about to run away together, Regina's mother Cora shows up and murders Daniel to ensure that she becomes Queen. ("The Stable Boy"/"Out of the Past") Regina attaches her engagement ring to a chain and puts it in her jewelry box, where it's found by the King's daughter Snow White. She puts it on around her neck, complimenting its beauty and wondering where her future stepmother got it, and Regina explains how Daniel gave it to her - before Snow spilled her secret and got him kill by Cora. She then begins pulling on the chain and strangling Snow with the necklace... at least, in her head. Once she's pulled back into reality, she answers Snow's questions by saying that she doesn't remember where she got it. ("We Are Both")

Regina is caressing her engagement ring in her Mayoral office in Storybrooke, having imbued it with magic to show Daniel's face, when Mr. Gold walks in and makes a comment about remembrance for things past. When Mary Margaret is accused of murder and it looks as though she's about to go to jail, Regina takes out her ring and whispers to it, "We got her, Daniel. We got her." ("The Stable Boy") When Regina needs a way to get rid of Emma Swan without killing her, she decides to use Jefferson's hat to retrieve her poisoned apple from the Enchanted Forest. However, it needs to be charged with magic, and Regina's trinkets aren't enough. She is forced to sacrifice her engagement ring, which only opens a portal big enough to retrieve something small - luckily for Regina, that's all she needs. ("An Apple Red as Blood")

Retrieved from "https://onceuponatimeabc.fandom.com/wiki/Regina%27s_engagement_ring?oldid=85483"
Community content is available under CC-BY-SA unless otherwise noted.