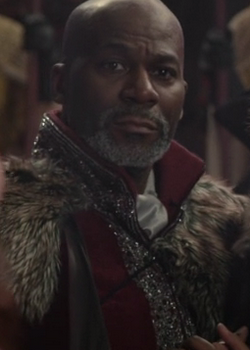 Rapunzel's Father is an episodic character on Once Upon a Time.

Charming and Rapunzel enter the Dark Palace together, where everyone is congregated. Belle and Regina move out the way to reveal Rapunzel's parents, who are shocked to see their daughter. "Mother... father..." she utters as she approaches them, but they run towards her, delighted. The three of them share a loving hug, and as they reunite, Charming walks towards Snow. She asks if he's going to tell her what he was doing out in the woods all night, and he admits to being there because he was afraid. Snow is surprised to hear this, wondering what he was scared of, but she soon looks down at her pregnant belly and realizes that it's because they lost Emma. "Twice," the prince points out, "Once as a baby and then again when we were forced to return to the Enchanted Forest without her." Snow argues that neither time was their fault, and David says he knows, but adds that, because they lost her, he was never her father. She tries assuring him that he has been a great father, but he points out that he's only been her father whilst she was an adult, meaning he never got to raise her. He touches his wife's belly and says that he's never done anything like this before and doesn't know if he can, referring to raising their next child. "You don't have to," she assures him, "We're going to do this they way we do everything: together." Smiling, David asks his wife how he could forget that, before pointing out that the two of them have a nursery to build. The royal couple make their way out of the hall, hand-in-hand. ("The Tower")

Retrieved from "https://onceuponatimeabc.fandom.com/wiki/Rapunzel%27s_Father?oldid=60271"
Community content is available under CC-BY-SA unless otherwise noted.