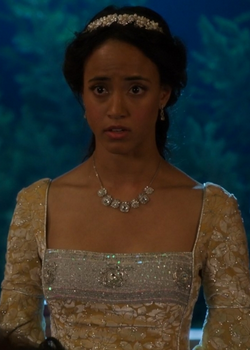 Rapunzel is an episodic character on Once Upon a Time. When she was a little girl, Rapunzel was accidentally responsible for her older brother's death and thus became scared that she would not be able to rule the kingdom as well as her parents when the time came for her to be crowned Queen. To eradicate these fears, she went in search of the night root, only for this to manifest a witch that chased her into a tall tower for years on end, causing her hair to grow to an enormous length. One day, she notices another seeker of night root in the forest below and calls out for him, allowing Prince Charming to climb her long hair. With his help, she is able to face her fears and vanquish the witch, going on to reunite with her parents at long last.

When Prince Charming is riding through the forest in search of night root, a magical plant that eradicates fear from the eater, he is distracted by the calls of a damsel in distress - Rapunzel. He discovers the tower she's locked in and begins climbing the vines at the bottom, however, halfway up, he climbs using her incredibly long hair instead. Once he's up there, she utters that he's the first person she's seen such in a long time, leading him to wonder how long she's been up there; by gesturing her unnaturally long plait, she admits to having lost count of the years. He introduces himself and, noticing her tiara, realizes she's a princess. Having seen what he was digging up, Rapunzel wonders what he was afraid of, having originally come to that part of the forest in search of the same thing. The prince wonders why, and she explains that her mother and father were King and Queen, but when he older brother died, she feared she would not be able to take over the throne. When Charming tries to leave with her, she stops him, revealing that a witch chased her into the tower and that same witch comes whenever she tries to leave. However, it's too late, the witch already knows of Charming's presence and he looks out the window to see a cloaked figure approaching; it begins to climb up the tower's vines, soon using Rapunzel's long braid to ascend to the window. Charming assures the worried princess that he will protect her, and attempts to slay the cloaked being, but it uses its magic to evade him and ties him up with Rapunzel's hair when it enters the room.

It advances on the princess, who's utterly petrified, whilst Charming tries to stop it. Suddenly, the cloaked figure turns to him and he sees that Rapunzel's own face lies beneath the hood. This causes him to realize that, when one digests night-root, it helps them overcome their fears by facing them, placing said fears into a manifestation. He assures Rapunzel that she can stop it, but she doubts herself, too scared, meaning Charming has to rescue her by tearing through her hair and leaping from the window with the night root manifestation in his arms. Shocked, Rapunzel looks out the window to check if he's okay, and she sees that the prince is clinging to the vines whereas her fear-based counterpart is climbing up her hair. Charming tells her that if she doesn't face her fears then she will die alone in the tower, further assuring her that she has the capability to stop this, and only she can do it. Finding confidence in the prince's words, Rapunzel grabs his sword and cuts her hair off at the ledge, causing the witch to fall from the tower and explode into a cloud of dust, vanquished. Charming aids the princess on the climb down, her hair now short, and she reveals to him that she was swimming in a river when she got carried away by the rapids; her brother dove in and saved her, but was unable to save herself. He offers his condolences and assures her that her parents will forgive her for leaving, taking her back to his palace. There, Rapunzel reunites with her mother and father, much to their extreme delight. ("The Tower")

1 of 16
Add photo
Retrieved from "https://onceuponatimeabc.fandom.com/wiki/Rapunzel?oldid=73271"
Community content is available under CC-BY-SA unless otherwise noted.