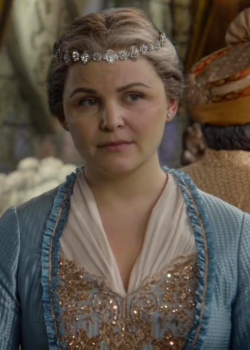 Queen Snow is an episodic character on Once Upon a Time.

When the Evil Queen fulfills Emma's wish to have never been the savior, the latter is transported to a wish realm where the Dark Curse was never cast, meaning she grew up a coddled princess and that Snow and Charming - or rather, Queen Snow and King David - were able to grow old as rulers of the Enchanted Forest. The King and Queen celebrate on the day of their daughter's birthday, happy to hear that she wished for nothing due to her belief that everything's perfect. However, she did have a dream the night before that the Evil Queen wasn't defeated, and that they were still fighting her in a realm known as "Storybrooke". Snow assures her that all that was avoided, but Emma finds it strange that she found a sword under her bed. Henry then arrives and assumes the sword is a gift for him, considering he is to be dubbed a knight the following day, but Snow soon tells him to put it away because their family is done fighting. Later, Emma is singing in the garden and approached by Regina, who wished herself into this new realm in order to save her friend. However, she is mistaken for the Evil Queen and attacked by Snow and David, only narrowly managing to escape. When Henry's knighting ceremony finally takes place, Regina shows up in full Evil Queen attire, wanting to be a villain so as to inspire Emma back into being the savior. She freezes the King and Queen and kidnaps them, hoping Emma will come save them, and so Snow and David wait in the Queen's Dark Palace tied up and taunting that they will defeat her as they always do. Emma then shows up, to Regina's excitement, but does not fight for her parents. Instead, she hands Regina the key to their kingdom, initiating full surrender. Regina is appalled and, in a last-ditch effort to tap into Emma's heroic side, rips out Snow and David's hearts. When Emma still fails to step up, she crushes them, and the Snow and Charming of this reality promptly fall dead. Henry then shows up to avenge his grandparents, but seeing him try to kill Regina finally causes Emma to wake up and stop him, then wanting to find a way home with her friend. ("Wish You Were Here")

Retrieved from "https://onceuponatimeabc.fandom.com/wiki/Queen_Snow?oldid=104026"
Community content is available under CC-BY-SA unless otherwise noted.