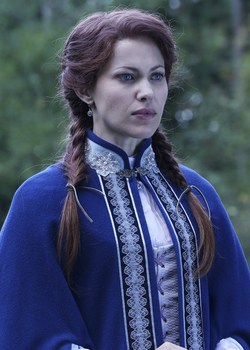 Queen Gerda is a minor, but prominent, character on Once Upon a Time. Once a princess with two older sisters she loved dearly, Gerda ended up becoming the Queen of Arendelle when one sister - Ingrid - accidentally killed the other - Helga - with her secret powers of ice and snow. Gerda took extensive measures to make sure that no one in the kingdom would be able to remember them, but all magic comes with a price, and she ended up with her own empowered daughter Elsa, followed by another normal daughter Anna. The queen took many of her mistakes to her grave when she and her husband died at sea, leaving their daughters to discover some questionable things about their parents and their past.

As children, Ingrid and her two younger sisters, Helga and Gerda play in the gardens of their castle in Arendelle. They come across a man who attempts to kidnap the latter two, but Ingrid accidentally kills him with ice magic. She fears she's an uncontrollable monster, but her sisters promise to be there for her and they make ribbon bracelets to symbolize their love. Many years later, a ball is held at their castle to find suitors for the girls. As Helga and Gerda prepare themselves, Ingrid reveals she isn't going because of her unstable magic. However, as the ball takes place, Ingrid pays a quick visit to it, but when she sees her sisters having fun, she becomes sad and decides to leave. As she packs her things she's caught by her sisters who persuade her to stay as Gerda has heard of a powerful sorcerer that can help contain magic; it is none other than Rumplestiltskin. They visit Rumple and he gives them a magical urn, which can trap any magical being, in return for their ribbon bracelets, as they're a symbol for love and this makes them tainted with magic. Once they return home, the Duke of Weselton, Helga's suitor, makes a move on Ingrid and she falls back on her magic. He attempts to lie to Helga about what happened, but she doesn't believe him. A fight breaks out and the Duke makes threats, provoking Ingrid to use her magic again. However, Helga gets in the way and turns to ice before crumbling into pieces. Gerda discovers Ingrid beside their sister's frozen remains and her fears manifest. Despite Ingrid's sobbing pleas for help, Gerda desperately uses the magic urn to trap her after calling her a monster. Gerda then visits Grand Pabbie and asks him to remove everyone in Arendelle's memories of her two sisters. Before or after this request, she hides the urn containing her sister inside a cave in the North Valley ("The Snow Queen")

Gerda becomes queen and has two daughters, Elsa and Anna, the former having familiar magic. She travels to Misthaven once again to find a cure for her eldest's powers. She told of a magical hat by the same sorcerer she and her sisters met years ago, but is unable to claim it ("The Apprentice"). Heading back to Arendelle, her boat is caught in a monstrous storm. Knowing that neither she or anyone will make it out alive, Gerda hastily heads below deck to write a message. As she writes, her husband - the King of Arendelle - begins descending the stairs in search of her and pleads with her that they abandon ship, but Gerda is determined to finish what she's writing. With the message now enclosed in a glass bottle, they make their way above deck to do what must be done. Gerda eases her husband's doubts by positively answering that in order to save their daughters, Anna and Elsa must know the truth. With that, he throws the bottle and its message she put her hopes in into the sea before their ship sinks. ("A Tale of Two Sisters")

Five years later, Elsa is queen and helps prepare for her younger sister's wedding. She stumbles upon their mother's diary and realizes that their parents weren't going on a diplomatic mission, but rather one because of her powers. This makes her feel they thought she was a monster and responsible for their death. With knowledge from Grand Pabbie and against Elsa's wishes, Anna heads to Misthaven to find answers. ("A Tale of Two Sisters")

While Anna is away on her journey, her old dalliance, Hans, tries to take over the kingdom using the same urn Gerda used to get Elsa out of the way. This leads to Ingrid's release. After dealing with Hans, she and Elsa return to Arendelle, where the former reveals that she's Gerda's sister. She asks to see her, but Elsa informs her aunt of her mother's tragic fate. She then voices her concern for her sister, Anna, who went missing, but Ingrid assures her they'll find her. ("Rocky Road")

Meeting Rumplestilskin, Anna is shaken upon finding out her parents tried to remove Elsa's magic. Getting him to send her home, she confides this to Kristoff. She decides to keep the truth from Elsa until the right moment. ("The Apprentice")

Returning to the castle, Anna is surprised that she has an aunt and confides to Kristoff again. She heads to the Rock Trolls for questioning. Grand Pabbie reveals that her mother had two older sisters named Ingrid and Helga who mysteriously vanished after an unknown tragedy that even he doesn't know and the royal family (obscuring the decision Gerda's) came to him to erase all knowledge of her maternal aunts. Anna realizes Ingrid is up to something if she's keeping these secrets and rushes to warn Elsa. ("Family Business")

Capturing Anna and burying the magic item she had, Ingrid asks the Apprentice to find her a new sister for her and Elsa, to replace the old ones she had that couldn't accept her. Ingrid tells Elsa that Anna kept the truth of what she found out at Misthaven, along with what her parents had been looking. She lies that Anna tried to use it on her and called her a monster. Elsa is in disbelief of this as her sister had always supported her. Ingrid relates that she thought that with her mother until she placed her in the magic urn. This revelation of her mother shocks the queen. Ingrid further states Anna's similarities to Gerda and that she'll never accept relatives with magic. Influenced by their aunt's spell, Anna angrily voice her resentment towards her sister for shunning her during their childhood. Watching her nieces pitted against each other, Ingrid tells her elder one that just like their mother did to her, Anna won't listen to Elsa and she must freeze Anna. Elsa refuses and is imprisoned. ("Smash the Mirror")

After Ingrid casts the Spell of Shattered Sight, her magic keeping Arendelle frozen wears off. Anna and Kristoff try to find a way to save Elsa by bargaining with Blackbeard for a wishing star. However, he sells them out to Hans. Noticing Anna's resemblance to her mother, pirate reveals her parents, trying to get rid of Elsa's powers while keeping their identities hidden, came to him for the wishing star, but were unsuccessful. Hans brings the couple to be dump at Posiedon's Boneyard, the same place where Anna and Elsa's parents' ship went down, and finds it fitting Anna will suffer the same fate under the same circumstances as her mother had. ("Fall")

Successfully casting the Spell of Shattered Sight, Ingrid tries to get Elsa and Emma Swan to be her new sisters. Anna rushes in before Emma can strike Ingrid and reveals a note her mother wrote. Gerda is remorseful for betraying Ingrid and erasing her and Helga's existence. She's attached a crystal that holds their memory and reveals Ingrid's imprisoned location, begging her daughters to set things right and tell their aunt that truly she loved her, wishing to hold her hands one last time like Ingrid wanted. Touched by these words, Ingrid forgives Gerda. Horrified at what she's made herself, she sacrifices herself to undo her curse and happily reunites with Gerda and Helga in the great beyond while Anna and Elsa follow through on their mother's final wish. ("Shattered Sight")

Following Ingrid's death, the royal sisters and Kristoff return to Arendelle, oust Hans, and return Ingrid and Helga's memory. Just before her wedding, Anna reveals that she found a portrait of their mother and aunts amidst the things locked away inside their old room in the East Wing of the palace. She and Elsa decide to display it in deference to their late family members. ("Heroes and Villains")

Gallery of promotional stills released to promote the character.

1 of 1
Add photo
Retrieved from "https://onceuponatimeabc.fandom.com/wiki/Queen_Gerda?oldid=112572"
Community content is available under CC-BY-SA unless otherwise noted.