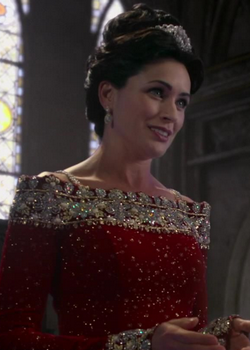 Queen Eva is a minor character on Once Upon a Time. She is the beloved late wife of King Leopold and loving mother of Snow White. She was adored by her family and her kingdom for her kind nature, insisting all people of different class are equal. However, not everyone loved Eva, and this eventually led to her death when Cora poisoned her with deadly magic.

Prince Leopold was betrothed to at birth to Princess Eva. The day before meeting in person, Leopold runs into a woman named Cora. She has just been robbed by the castle's gardener, Jonathan. Leopold has Cora stay at the palace with him. They bond as they walk through the woods together and Leopold reveals that he is betrothed to Princess Eva, who he hasn't met yet, but he'd rather take Cora for a bride, and she encourages him to do so, reminding him of his power. Later, Jonathan finds Cora at the garden, admiring the gold engagement ring that Leopold gave her, and he figures that the prince doesn't know about the child she's carrying. He demands that Cora give him as much gold as she can spare or he'll tell Leopold the truth, and she agrees to do so. Little does Cora know that Princess Eva heard the entire conversation. Later, Cora is gathering money in the great hall when she's stumbled upon by Leopold, who's heard a rumor that she is with child. Cora insists that this is a lie, but Eva steps out and denounces her, explaining that she overheard her rendezvous with Jonathan earlier. Cora is taken away by guards and goes on to give birth back at her village, but she abandons her daughter in the woods and the baby is carried away by a magical cyclone. ("Bleeding Through")

As Cora, the young daughter of a miller, delivers flour to King Xavier's castle, Eva, an honored guest who is there are the time, spots her nemesis carrying the heavy bags. As she, the king, and his son walk past Cora, Eva subtly trips her up, causing her to fall and spill flour everywhere. Eva yells at Cora, calling her a "stupid foolish girl". The king asks what happened, so Eva explains that the peasant fell. The king asks her if she's all right, but Cora assumes he's asking her, so replies. When the king corrects her, Eva states that Cora ruined her slippers. Henry tries to defend Cora, but his father says she'll receive no money for the flour and she'll apologize to Eva. Cora is appalled at the idea of apologizing, claiming she was tripped and calling Eva a wench. The king tells Cora to watch her tongue and reveals that Princess Eva is an honored guest visiting from the Northern Kingdom. Cora angrily snarls that she's just a girl. The king asks for Cora's name, and when she gives it, he demands her to kneel. She reluctantly obliges and then even apologizes to Eva when asked again, worried the king won't buy her flour any more. The royals then leave as Cora stays kneeling down on the ground, where she belongs. Later on, Eva witnesses Cora successfully spin straw into gold. ("The Miller's Daughter")

Many years later, Eva is now married to King Leopold and has a young daughter named Snow. She is now more mature as a person and very kind and caring to all her people. As her daughter's birthday arrives, a party is planned for her. Eva wishes to give her daughter a family heirloom, a silver tiara, which has been in their family for generations. Whilst showing the crown to her daughter, she realizes how spoiled she is, so begs that she be good and treat her people well. However, shortly after, a grave illness falls upon Eva, causing her to stay in bed for a long while. Snow visits her mother as she rests and suggests calling off her birthday ball, but her mother refuses to do so, as it'll be a special day. Snow tells her mother she doesn't care about her birthday, claiming she only cares about her mother. Eva is touched, but Snow is soon taken away when she begins to cough up blood. Johanna, one of the maids, takes Snow away and comforts her by saying the Blue Fairy may be able to help Eva. Snow finds the fairy, but learns the only way to save her mother is to take the life of another. Snow decides she cannot do this, as she wants to be good. Eva is proud of her daughter and tells her she has strength. Shortly after this, she dies in front of Snow, who breaks down crying. A funeral is soon held and many people, including her daughter, visit to pay their respects. Once everyone has left the funeral, Cora, who was in the disguise of the blue fairy, reveals her master plan to the corpse of the late queen and promises to blacken Snow White's heart to tarnish Eva's legacy. ("The Queen Is Dead")

After the First Curse

In confrontation with her former step-mother and step--grandmother, Snow slowly learns that her mother was poisoned, not ill. A smug Cora sadistically tells her that the candle she was offered would've saved Eva. Threatening Johanna, Cora orders for the Dark One's Dagger. Snow relents, but Cora kills Johanna as cruel way to show her where good gets her. At the burial, a heartbroken Snow vows to kill Cora to avenge her mother and handmaid. ("The Queen is Dead")

Snow eventually regrets her desire after it's done. ("The Miller's Daughter")

During the Second Curse

Zelena the Wicked Witch learns why her mother Cora abandoned her. She plots to go back in time and kill Eva before she reveals Cora's pregnancy. This would not only get her the life Regina had, but also eradicate the existences of her half-sister and Eva's daughter, granddaughter, and great-grandson. Learning this from Cora's ghost, Snow is shocked to learn of her mother's cruelty. Finding out about their mothers' dark pasts, Snow and Regina finally bury the hatchet and decide to move forward from their grudge.("Bleeding Through")

1 of 4
Add photo
Retrieved from "https://onceuponatimeabc.fandom.com/wiki/Queen_Eva?oldid=113697"
Community content is available under CC-BY-SA unless otherwise noted.