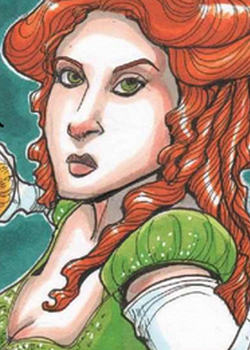 Priscilla is a character in the Once Upon a Time graphic novel, "Out of the Past". She is the deceased wife of Jefferson, and mother of Grace. She and Jefferson first meet during a robbery at the King's castle in Camelot, and from there the two go on many adventures with one another before finally settling down in the Enchanted Forest. However, due to Jefferson's desire to make one final trip through his infamous portal-jumping hat, Priscilla pays the price with her life.

Living as a thief, Priscilla eyes her next big heist to steal treasures from the King's castle in Camelot while a party is underway. Dressed as a guest, she quickly breaks into room number nine, which contains a large quantity of gold valuables. Shortly after her arrival, another thief, Jefferson, enters, and she tries to scare him off by pretending to be one of the King's guards, though he sees through her disguise. Before the real guards reach them, Jefferson considers escaping into his portal hat alone, but Priscilla hauls him with her out a window. Once they are outside, he convinces her to journey into the hat with him. She agrees, and they end up having many thieving adventures together, before falling in love. After marrying, they settle down in the Enchanted Forest and Priscilla births a daughter, Grace, as Jefferson puts his portal hat away. Two years later, their finances are drained, but when Jefferson learns the Clock of Evermore's location, he heads to Wonderland to steal it, hoping to sell it for money. When he doesn't return, Priscilla gains the White Rabbit's help to rescue her husband from the March Hare, although Jefferson insists on retrieving his hat. With the March Hare chasing them, the pair flee upstairs, where Priscilla is fatally wounded by a guard's arrow. Not wishing Grace to be orphaned, she persuades Jefferson to go home without her. As she dies, he holds her one last time before escaping into the portal hat. ("Out of the Past")

Retrieved from "https://onceuponatimeabc.fandom.com/wiki/Priscilla?oldid=78706"
Community content is available under CC-BY-SA unless otherwise noted.