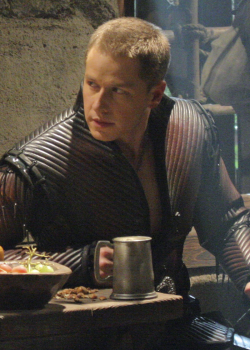 Prince James is a supporting character on Once Upon a Time. He was the adopted son of the evil King George and Prince Charming's twin brother as well Emma Swan's uncle. The King bought James from Rumplestiltskin to pose as his son, and the young man grew up to become a skilled warrior. George's plan was for James to marry Princess Abigail, the daughter of King Midas, so that his disgraced kingdom could unite with theirs, and gain a rather large amount of riches. However, James was tragically killed during a fight, and was eventually replaced by his twin brother who took his identity.

In exchange for abidance, King George seeks out the Dark One, Rumplestiltskin, and requests that he procure him a son. Rumple approaches a pair of married shepherds named Robert and Ruth, who have two twin boys named David and James. Since neither can survive the winter, Rumple offers them medicine to cure one of his cold in exchange for his brother, eventually taking James after a coin-toss decides it. George takes James and raises him as his own, wanting him to be a knight. However, James doesn't want to kill things and, at the age of six, he runs away. George assumes he's been abducted and gets the whole kingdom out searching for him, even going into the tavern where Robert normally likes to get drunk. Robert finally grows a spine and goes looking for James, finding him on Pleasure Island, where George is waiting at the dock. When Robert refuses to give him his son back, George offers to pay him, but it doesn't work... and so George orders the shepherd to be killed, and Prince James reluctantly remains just that: a prince. ("Murder Most Foul")

Prince James is seen making out with his new girlfriend, Jacqueline "Jack", before moving her over to the bed. Before the situation can progress, King George walks in to tell his son that a giant has been spotted roaming the outer-village. Jack mentions that she has always wanted to do battle with one, but George tells them not to kill it as they stand to gain something from it. James and Jack later approach the giant, Anton, and the latter gives him a piece of mushroom from Wonderland that she was given for slaying a Jabberwocky. Anton eats it and shrinks to human-size and James and Jack treat him to a drink at the tavern he was previously inspecting. As James goes to get them some drinks, he is hassled by a knight and Jack explains to Anton that the kingdom is in great dept to another kingdom and if they don't pay it soon, the kingdom will be burnt to the ground, Anton offers to give up his treasure in order to save the kingdom. Jack thanks him, calling him a hero. Jack and James later arrive at the top of the beanstalk in the giants' castle and reveal that they were conning Anton the entire time in order to steal the giants' magic beans. The pair of them kill all of Anton's brothers but are unsuccessful in getting any beans. Jack is stabbed by Arlo and begs for James' help as she dies, however, James bags all of the treasure that he can gather and flees the castle, telling Jack that he has a kingdom to run and that she understands. ("Tiny")

James is seen battling a great warrior, Behemoth and soon manages to stab him, seemingly killing him. He is clapped for by his father, King George, as well as King Midas, who was also in attendance. Midas goes on to tell George and James that his kingdom is being plagued by a fearsome dragon and that he needs a warrior to defeat it. George states that there is no better warrior than his son, and James agrees to sleigh the dragon, in order for treasure for the kingdom. As a deposit for their deal, King Midas turns James' sword to gold, before leaving. James tells his men to prepare, and as he is doing so, he is stabbed from behind by Behemoth, who turns out to be alive. James falls to the floor and dies. His father and knights mourn his death and Rumplestiltskin appears to King George, telling him that James has a twin that could take his place in slaying the dragon. Rumple collects Charming, James' twin, and he begins to masquerade as his brother, managing to slay the dragon and forever stuck in a rouse of being Prince James. ("The Shepherd")

Following his death, James' soul is transported to the Underworld, which is modeled after the town of Storybrooke. He is the sheriff and enters into a sexual relationship with Cruella De Vil. ("Souls of the Departed"/"The Brothers Jones") When Captain Hook dies, James' identical twin brother David - along with his family and friends - comes down to rescue him, and James spots his brother's wife Snow White searching the vilified version Granny's Diner. He immediately grabs her and kisses her passionately, then stating that he understands what his brother sees in her. This causes her to realize that he is not her husband, to his amusement, and he goes on to say that if she sees "old Dave" (who he assumes is in town is well) then she is to tell him that there's a new sheriff around these parts. He then heads off into the backroom just as David enters, and the latter is made uneasy by his brother's presence. ("Souls of the Departed")

David heads out to gather supplies for Robin and his baby in the forest when he's ambushed by James, who reveals that Cruella was wrong: he doesn't hate Charming because their mother chose him, he hates him because he got to have all the glory. David tries making a case for himself, protesting that it wasn't his fault either way, but this doesn't stop James from tasering him into unconsciousness. He decides that, since David got his chance to play the prince, he's going to try "playing the shepherd"; he proceeds to lock his twin brother up in the sheriff's station and he heads to the apartment, pretending to be David. Emma seems to be falling for the act as the two of them head out into the woods to give Robin the supplies, but then suddenly James slaps an anti-magic cuff on his niece's wrist, with Cruella having told him not to face the savior without one of them. Cruella herself then shows up, giving Emma a punch in the face for being the one who killed her, and she and James take Robin and the savior hostage, bringing them to the docks and threatening to throw them into the River of Lost Souls. It's all part of a plan to use Baby Hood as leverage against Hades. However, David soon shows up and saves the day, pointing out that it was stupid of James to lock him up in his own jail because he knows how to escape. The two princes then face off, and a lengthy fight ends with David being forced to throw James into the river. Cruella flees the scene while David laments that there must have been another way, but Emma comforts him by saying that there was not; some people just can't let go of the past. ("Sisters")

1 of 2
Add photo
Retrieved from "https://onceuponatimeabc.fandom.com/wiki/Prince_James?oldid=108951"
Community content is available under CC-BY-SA unless otherwise noted.