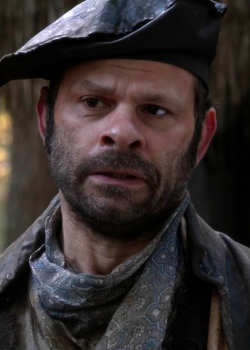 This peasant is an episodic character on Once Upon a Time. He is the victim of a thief hired by Queen Regina in an attempt to ruin Snow White's reputation.

Queen Regina hires Dead-Eye, a skilled thief, to target the villages of her kingdom to embarrass Snow White and show their people she's not fit to rule. When the villagers, including the peasant, come to complain about the criminal, Snow panics and runs from the castle. She runs into Hercules and he gives her the confidence to face the thieves, so she does just that. However, when she confronts Dead-Eye, she humiliates herself by dropping her arrows all over the floor. Dead-Eye later visits the queen to collect his payment and asks if she doesn't just want him to slaughter the princess. Regina explains that she doesn't want Snow to die as a martyr for her people, but she wants people to see she's not fit to be their queen. After a confidence boost from Hercules, Snow decides to face Dead-Eye again, and this time she is successful in scaring him off. He gives the villagers their belongings back before leaving, never to return. The villagers celebrate and thank their savior, Snow White. ("Labor of Love")

Retrieved from "https://onceuponatimeabc.fandom.com/wiki/Peasant_(5.13)?oldid=95180"
Community content is available under CC-BY-SA unless otherwise noted.