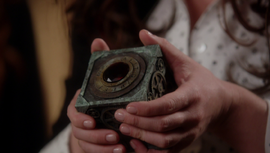 Samuel, a childhood friend of Belle's, wants to rescue her from the clutches of the Dark One, Rumplestiltskin, by trapping him inside Pandora's Box. However, he fails, and Rumple simply ends up adding the box to his vast collection of magical artifacts. ("Out of the Past")

Wanting to bestow a fate worse than death upon the evil Peter Pan, Rumple and Regina send the mermaid Ariel to Storybrooke so that she can find Belle and get her to retrieve Pandora's Box from Mr. Gold Pawnbroker & Antiquities Dealer, where it's kept. Belle finds it with the help of a magical charm kept on the chipped cup, but then it's robbed by John and Michael Darling. They have orders from Pan to destroy the box, but Belle stops them from doing so by promising that she'll have Rumple rescue their sister Wendy from Neverland. Ariel takes the box back to Rumple on the condition that he follow through on this promise. ("Dark Hollow") Rumple tries using Pandora's Box to trap Pan, but Pan uses "find the lady" to create a fake and steal the real one, then trapping his son in the actual Pandora's Box. ("Think Lovely Thoughts") Pandora's Box is stolen back and Rumple is freed, though Pan still roams. Rumple traps his father but, as he's being sucked in, Pan trades consciousnesses with Henry, meaning it's Henry who is in fact trapped. ("Save Henry") After returning to Storybrooke, the box is sealed beneath Gold's shop. Pan's shadow continues to wreak havoc though, and so they decide to free Pan over the town line and shoot him dead. However, after being released, Henry reveals just in the nick of time that it's in fact him, and everything eventually works out for the best in that scenario. ("The New Neverland")

In the Underworld, Pan offers Rumple the alternative version of Pandora's Box so that he can carry Belle, who is under a sleeping curse, back to Storybrooke. After sending his father to the River of Lost Souls, and rightfully so, Rumple does just this. ("Firebird") Belle is kept in the box as Rumple struggles to find a way to wake her from her curse; he tethers Storybrooke's magic to the Olympian Crystal in a bid to gain more power, but then it's stolen by Henry and taken to New York. Rumple puts the box on a little cushion in the passenger seat of his car as he follows his grandson, and later he brings it to his hotel room. However, it is stolen when Mr. Hyde opens a portal using the Apprentice's wand. Once the box – or rather, Belle – is in his possession, he has the leverage he needs to force Rumple to adhere to the conditions of his evil plot. ("Only You")

Retrieved from "https://onceuponatimeabc.fandom.com/wiki/Pandora%27s_Box?oldid=113468"
Community content is available under CC-BY-SA unless otherwise noted.