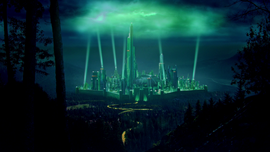 Oz is a realm known for containing the Yellow Brick Road, hosting the Emerald City, as well as being populated by munchkins, quadlings and more.

For years it was ran by what was believed to be an all-powerful wizard, Oz, the Great and Terrible, but when he was exposed to be but a mortal man, the realm was conquered and dictated over by Zelena, the "Wicked Witch of the West". Having become fear-stricken and tormented, no one dared oppose this Witch's reign... no one except Dorothy Gale.

Wanting to give herself her best chance, Cora abandons her newborn daughter in a basket in the woods, where she is promptly carried by cyclone to the realm of Oz. ("Bleeding Through") The crying baby is then found by a woodcutter and his wife, the latter of which wishes to adopt the child and name her "Zelena". Despite this, the woodcutter has caught on to Zelena's displays of magical abilities, deeming this to be pure "wickedness". ("It's Not Easy Being Green")

Years later, after the woodcutter's wife passes away, Zelena is left to grow up under the abusive authority of her adoptive father. One day though, Cora, her biological mother arrives in Oz seeking out Zelena's help. She brings her back to the Enchanted Forest to heal her younger half-sister, Regina, and the two end up becoming the best of friends. This is eventually cut short, for Cora wipes their memories when they discover their familial connection, and Zelena is sent back to her life in Oz. ("Sisters")

A man named Walsh finds his way from Kansas and into Oz where he is believed to be this all-powerful wizard. He decides to keep the act going. ("It's Not Easy Being Green") Brother and sister, Will and Penelope Scarlet grow up as close friends, but tragedy strikes when Penelope falls through an ice-covered lake and dies. Will is never able to get over it. ("To Catch a Thief"/"Heart of Gold")

Zelena, meanwhile, leaves home when learning she is not the woodcutter's daughter and that he does not love her. She seeks out the Wizard's help so that she can find a family that loves her, thus leading her back to the Enchanted Forest. Things don't go well there though, for she returns to Oz, having embraced her wickedness, and winds up exposing the Wizard for who he really is: a simple, mortal man. She turns him into a flying monkey. ("It's Not Easy Being Green")

Zelena is met by Glinda, the Good Witch of the South, who wants to make Zelena apart of the Oz Sisterhood of Witches. Her magic is channeled into a pendant that will grow her power. All is fine until Dorothy Gale shows up, however, and Zelena's jealousy once again stems up. She later learns from a prophecy that Dorothy is meant to defeat the greatest evil Oz has ever seen, or, Zelena. The now-Wicked Witch decides to do away with Dorothy by giving her a pair of silver slippers to send her home to Kansas. Meanwhile, Zelena banishes Glinda to the Enchanted Forest, and takes over Oz. ("Kansas")

Rumplestiltskin, a man Zelena grew to know during her trip to the Enchanted Forest, sends portal-jumper Jefferson to Oz after the silver slippers the Wicked Witch possessed. He returns to the Dark One empty-handed though. ("The Doctor")

The Dark One sends another to Oz on a mission, that being Robin of Loxley, who is told to break into Zelena's palace and steal the Elixir of the Wounded Heart. He does so, encountering the Wicked Witch in the process, but soon escapes. He doesn't bring the elixir back to the Enchanted Forest though; instead he gives it to Will Scarlet to cure his own heart of heartache. ("Heart of Gold")

Zelena's been in the process of putting together a time travel spell so that she can stop her mother from ever abandoning her; doing so, she needs the symbols of innocence, love, wisdom and courage. The symbol of wisdom can come in the form of the Scarecrow's brain, which she fights to obtain. Dorothy Gale makes her grand return to Oz though to once again face Zelena. Meanwhile, the Wicked Witch forms a brief partnership with Hades, Lord of the Underworld. Zelena winds up getting the Scarecrow's brain, defeating Dorothy, but pushes Hades away when he confesses his love for her. ("Our Decay")

Zelena eventually leaves her life in Oz behind to formally wage war against Queen Regina upon her return to the Enchanted Forest. ("New York City Serenade")

When Red Riding Hood is in search of a werewolf pact, she and Mulan find themselves in the realm of Oz. Though they seem to have no luck, they come across Dorothy Gale and her dog Toto. Just as these events occur, however, a cyclone arrives bringing with it Zelena, who has been banished back to Oz by her sister. Zelena wants to get back to her child though, so she demands Dorothy turn over her silver slippers; she takes Toto as ransom. Dorothy, Red and Mulan plan to strike back against Zelena, and Red and Dorothy fall in love in the meantime. Dorothy ends up leaving Red and Mulan to confront the Witch herself though, but this just ends with Zelena putting her under a sleeping curse and stealing the slippers . Red puts together a spell to take her wherever Zelena is located, bringing her to the Underworld. There, she comes to terms that she loves Dorothy and is the only one who can wake her, so she and Snow White use the slippers to go back to Oz again where Red wakes Dorothy with true love's kiss. ("Ruby Slippers")

Oz can be reached:

Retrieved from "https://onceuponatimeabc.fandom.com/wiki/Oz?oldid=111594"
Community content is available under CC-BY-SA unless otherwise noted.