Start a Wiki
Out of the Past 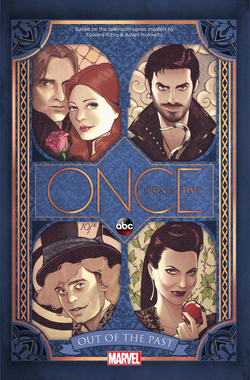 Out of the Past is an official canon graphic novel tie-in to Once Upon a Time.

It's the fairytale mayhem in the all-new sequel to the original graphic novel, Once Upon a Time: The Shadow of the Queen! Welcome to the Enchanted Forest, where the characters from classic fairy tales have come to life - and are locked in an epic struggle between good and evil! Plotted by series writer and co-executive producer Kalinda Vazquez, and co-written by returning author Corinna Bechko, this all-new blockbuster will tie into official show continuity as it spins four spellbinding, never-before-told tales of fan-favorite characters!

Board the Jolly Roger on an adventure with Killian Jones, before he was known as the notorious Captain Hook, as he uncovers the mysteries of the Leviathan Shoals and the monster that lurks beneath the surface.

Travel to the Enchanted Forest with the Evil Queen, Regina, where she faces down demons from her past. Will the skeletons in her closet haunt her forever?

Experience Wonderland in the unforgettable origin tale of Jefferson, the portal-jumping Mad Hatter, and witness the loss that caused him to lock away his magical hat for good.

"Dead in the Water"

Retrieved from "https://onceuponatimeabc.fandom.com/wiki/Out_of_the_Past?oldid=103080"
Community content is available under CC-BY-SA unless otherwise noted.