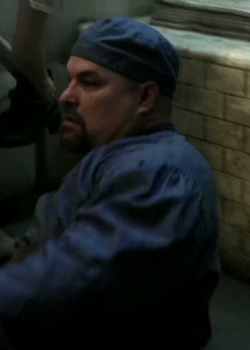 The Orderly is an unnamed man working at the asylum Alice resided at, in "Down the Rabbit Hole".

When Will comes to rescue Alice, three orderlies come into the chamber to get a hold of him and Alice. Alice tells one of them that she didn't do anything, and the Knave confirms this, claiming that if she'd been helpful they would have been long gone by now. One of the orderlies twists his arm and he shouts in pain. Alice tells them to get him out of there, and they try to remove him from the chamber, as he points out to Alice that she knows him and remembers. She says that she doesn't want to remember, she wants to forget. He begs her to listen to him, and she says, "No!" "He's alive!" he says. Alice looks back up at him, as he continues, "The Rabbit saw him. Cyrus! He's alive." Alice tells him that's impossible... Will replies that she knows as well as he does that nothing's impossible in Wonderland. One orderly punches Will in the stomach and he is overpowered, and as the orderly that was standing by her tries to make his way to the rest of them, she grabs him by the arm, getting him to turn to her, and hits him in the side of the neck with the side of her hand. He groans and falls to the floor. Alice then jumps and grabs the upper frame of the door and wraps her legs around the neck of one of the orderlies, overpowering him, until he himself kisses the floor as well. One of the guards taking care of Will rushes to her, and she knees him in the gut and punches him in the face, and down he goes too. Will is amused, as the two guards still on him try to subdue him. Alice bangs the door of her chamber against the neck of one of the orderlies on the floor, and the one that went down first gets back up and tries to lunge himself at her, only to be received with a kick to the stomach that sends him back. One of the orderlies with Will takes out a syringe and tries to hit her with it, but Alice ducks, hits him in the stomach and then stands up again and punches him in the face. The orderly doesn't go down, however, so she steps on one of his legs and piggyback rides him until they are both on the floor and she is able to overpower him. The last orderly still with Will lets go of him to make his way to the feisty young woman, but is received with an elbow to the face. Will looks on carefree, as Alice makes her way back to the chamber to retrieve her pair of boots. She hits one of the guards who was regaining conscience with them, and leaves the chamber, hitting another orderly with them as well. ("Down the Rabbit Hole")

1 of 2
Add photo
Retrieved from "https://onceuponatimeabc.fandom.com/wiki/Orderly_2_(W.01)?oldid=84839"
Community content is available under CC-BY-SA unless otherwise noted.