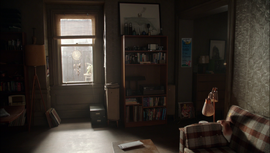 Neal's Apartment is located in New York City, and is the former home of Neal Cassidy, as well as being briefly inhabited by Robin Hood and his family.

Following the breaking of the Dark Curse, a message is delivered by August W. Booth to Neal Cassidy's apartment, saying "Broken." This alerts Neal that the Savior has fulfilled her destiny and defeated the Evil Queen. ("Broken") Finally able to procure enough potion to cross the town line and still retain his Enchanted Forest memories, Rumplestiltskin, accompanied by Emma and Henry, head for New York City in search of the Dark One's son, Baelfire. They track him down to his apartment, where he tries to escape, thus leading Emma after him. It doesn't take long for her to discover that Rumple's son is none other than her former lover, and Henry's father. He tries to run away, but ends up returning to find an enraged Rumple, and not too long after discovers Henry is his son. ("Manhattan") Neal and Henry start to bond as father and son while Emma and Rumple are pushed aside, and the two end go back to the apartment to get a camera for the museum they intend to go to next. However, Captain Hook makes an appearance, attempting to kill Rumple, but once defeated, he is locked in a broom closet of the building, thus giving everyone time to escape back to Storybrooke. ("The Queen Is Dead")

When Peter Pan tries to reenact the Dark Curse, Regina has no choice but to send herself and everyone else back to the Enchanted Forest in order to avoid it. However, seeing as how Henry cannot join them, Emma stays behind with him to leave the town and live out their lives in the Land Without Magic. In order to give them a fresh start, Regina gives them a set of fake memories where Emma never gave up her son. The two proceed to leave town, and spend the next year in New York. However, Hook, managing to escape another curse, finds Emma and tries to persuade her that her family needs her. To prove it, Hook gives her a written address that will make her see the truth. Arriving at the location, she realizes it is Neal's apartment after seeing his name on some letters. Emma grimly regards the dream catcher hanging on the window before noticing a camera strap that has Henry's name on it. Unsure how Neal knows of her son's existence, Emma also takes the camera film roll to see what kind of photos are on it. Emma does end up regaining her memories, and promptly returns to Storybrooke. ("New York City Serenade")

Robin Hood leaves Storybrooke with his family when remnants of the Snow Queen's curse on Marian appear to still remain. Thanks to Regina, they receive keys to Neal Cassidy's former apartment, which they promptly move into. However, after Rumple was banished from the town by Belle, the Dark One makes his way for the same location, causing some clashing between him and Robin. When his heart gives out on him though, Robin procures a magical potion that can save him in exchange for Neal's apartment; Rumple agrees. This comes to pass, and the two part ways, but not before Rumple learns that it's really Zelena posing as Marian. ("Heart of Gold") Regina soon learns of Zelena's scheme, and so she and Emma head for New York to rescue Robin. They make their way to Neal's former apartment, along with Emma's childhood friend Lily, and they walk on the couple. Zelena ends up dropping her guise, revealing the truth, but then makes it known she is pregnant with Robin's child. ("Lily") While Regina and Robin go out to discuss their recent discoveries regarding the Wicked Witch, Emma and Lily stay behind at Neal's former apartment where they watch over Zelena. Emma and Lily discuss the former's deceased love, and it's brought up how Zelena (who clearly feels no remorse) was responsible for his death. Not too long later, Regina and Robin return to the apartment and decide to head back to Storybrooke, bringing Zelena with them. ("Mother")

Retrieved from "https://onceuponatimeabc.fandom.com/wiki/Neal%27s_Apartment?oldid=94154"
Community content is available under CC-BY-SA unless otherwise noted.