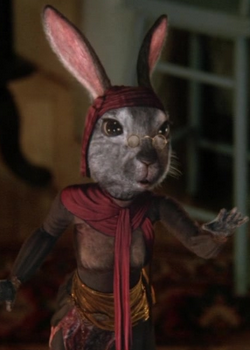 Mrs. Rabbit is a minor character on Once Upon a Time. She is the wife of the White Rabbit.

Cyrus carries a wounded Alice to the Rabbit's house. Inside, water is poured into a tiny, wooden teacup containing herbs, and the White Rabbit's wife, a black rabbit dressed in various scarfs a flowy fabrics, heaves the kettle she used to pour the water onto a surface, telling Cyrus and her husband to move away as she tends to the wounded Alice. She again asks Cyrus to move when he crouches in front of her willow root, and as the genie steps backwards, he asks if his true love is going to be alright. Mrs. Rabbit, who grabs a motor and pestle and begins grinding, says that she will help the girl, but Cyrus' fretting won't, and he asks if she expects him to do nothing. The White Rabbit then shushes the genie, telling him he'll wake the children, and Cyrus looks over to see two little rabbits, asleep in their beds. "Sorry. Forgive me, I burst into your home," he acknowledges, but Mrs. Rabbit tells him that it was a good thing he did, or else Alice wouldn't have survived the night; "But the best way to help her now is to let me do my work." Cyrus proceeds to watch helplessly as Mrs. Rabbit gently strokes Alice's hair, working as best she can to heal the girl. ("Home")

Alice, Will and the White Rabbit make their way to the Red Queen's old wagon. Will decides to enter the wagon. Outside, Alice and the White Rabbit are still waiting, and the rodent tells the girl that it's no use, speculating that the Queen's already slaughtered his family. However, Will soon emerges from the wagon, and with him are Mrs. Rabbit and her two children, who call out for their father and run to him. The White Rabbit joyously hugs his children and kisses his wife, who says she thought she'd never see him again, proceeding to thank Alice for whatever it is she did to bring them back together. The Rabbit asks his two children if they remember what he taught them about always keeping their promises, and they do, leading him to explain that he has to keep one of his own now. He tells Mrs. Rabbit to take the kids to her mother's, saying that he'll meet her there tonight, and she tells him to be careful. "Aren't I always?" he asks, to which Mrs. Rabbit sternly replies, "Do you really want me to answer that?" He promises to be careful, and his wife heads off with their children. ("Home")

Once helping Jafar break the laws of magic, Amara, along with Alice, rush a now deceased Cyrus to the White Rabbit's home for safety. Mrs. Rabbit suggests using willow root sap to close up Cyrus' injury, but Amara refuses. Surprised at the woman's response, she talks about her own long-term experience in healing, but promptly approves when Amara uses magic to resurrect Cyrus. The White Rabbit then unhappily complains about the bloody mess on the house carpet, but Mrs. Rabbit manages to calm him down. Alice, Amara, Cyrus, and the White Rabbit then leave the Rabbit family home to rally up an army to defeat Jafar. After Amara's death, Jafar is defeated by the guardian of the Well of Wonders - Nyx - who has caught him trying to steal her water. She punishes him by transforming him into a genie and trapping him in a bottle for the remainder of his days. With Wonderland saved, Alice and Cyrus leave for Victorian England where they are married by the White Rabbit; among the attendants is Mrs. Rabbit. Once the ceremony is finished, the visitors from Wonderland, including Mrs. Rabbit, say their heartfelt goodbyes and leave for home, via the White Rabbit's portal. ("And They Lived...")

Retrieved from "https://onceuponatimeabc.fandom.com/wiki/Mrs._Rabbit?oldid=113566"
Community content is available under CC-BY-SA unless otherwise noted.