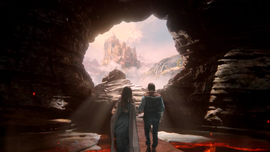 Mount Olympus is where all of the souls who are left with no unfinished business or have completed their unfinished business move on to, given that they were good people in the lands of the living. Those who move on to Olympus can be identified by their tipped-over gravestones in the Underworld.

Mount Olympus is ruled over by Kronos, who favors his more powerful God son, Zeus, who in turn is burdened with an evil and vindictive younger brother by the name of Hades. Hades is very jealous of Zeus and all he has, and his villainous antics grow to the point that he ends up killing their father. He then tries to steal the all-powerful Olympian Crystal - intended for the ruler of Olympus, now Zeus - so that he can use it to rule the world, but Zeus steps in and stops his brother's heart, snapping the crystal in the process. Without a heartbeat and no true love to restore it, Hades cannot repair the crystal and is trapped ruling over the lost souls of the Underworld: a job he despises, especially when the souls complete their unfinished business and become able to ascend Mount Olympus. ("Our Decay"/"Last Rites") Zeus has a baby, Hercules, with a human woman, making Herc a demigod with super-human strength. His life's ambition is to join his father in Olympus as a fully-fledged God, but to do this he must first complete twelve labors. ("Labor of Love")

Cora threatens to send her husband, Prince Henry, to a Worse Place if their daughter Regina doesn't leave the Underworld. However, he resolves his unfinished business just in time, meaning that when Cora makes the flames consume him they simply disappear and are replaced by a white light. The bridge in the fiery cave becomes fully-formed and he is able to ascend Mount Olympus. ("Souls of the Departed") After completing his twelfth labor, and saving Megara from the evil hell-hound Cerberus, Hercules is finally able to move on like he always wanted. Through the white light, he and Meg see a glorious mountainous realm; when Meg asks what it is, he replies that it's Olympus. ("Labor of Love") Liam Jones is tossed into the fire as well but it rejects him because his unfinished business is also resolved, thanks to his brother Hook. The crew whose deaths he caused are able to move on too, with the fire being replaced by water and a ship waiting in the distance to sail them to the better place: Olympus. They board a small rowboat in order to get to the ship. ("The Brothers Jones")

Cora herself is finally able to move on after she makes amends with both Regina and her other daughter Zelena. At first, it seems as though the fire might consume her, but then fate changes its mind and allows her to move on via the white light, to her and her daughters' joy. ("Sisters") After helping defeat Hades once and for all, Hook goes through the white light via an archway, leading him to a long hallway filled with golden pillars. There, he meets Zeus, who offers to take the pirate to where he belongs. Hook assumes he means the full scope of Mount Olympus, for right now he is merely in the precipice, but in fact Zeus means the land of the living. He resurrects the pirate as a reward for his help in Hades' defeat. ("Last Rites")

Retrieved from "https://onceuponatimeabc.fandom.com/wiki/Mount_Olympus?oldid=108542"
Community content is available under CC-BY-SA unless otherwise noted.