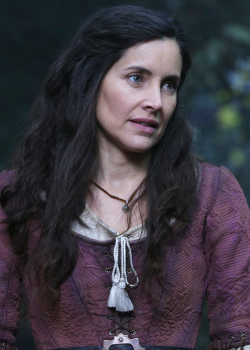 Milah is a minor character on Once Upon a Time. She was Rumplestiltskin's first wife and Baelfire's mother as well as the paternal grandmother of Henry Mills. She left her family before her husband became The Dark One because she thought he was a coward and she fell for Killian Jones, a pirate. However, her happy life of adventure didn't last for long as Rumple finally got his revenge on her for abandoning their son and she was killed in cold blood.

At some point Milah and Rumpelstiltskin were happily married. However he would soon leave for the Ogre War. Milah seems worried for him, but Rumple is excited to show that unlike his father he isn't a coward. Milah asks to Rumple to be honorable. During her husband's absence she learns of her pregnancy and later gave birth to a son, whom she names Baelfire. Shortly after, Rumple comes back, injured, asking their son's name. Milah doesn't seem surprised by his return and answers that their boy's name is Baelfire. Rumple approves saying that it's a strong name. Milah replies that Baelfire would need it to cope with the shame of being Rumple's son. She explains that she knows the cause of Rumple's injury-- that it was self-inflicted. He says that he did this for them, for their son so that he doesn't leave Bae fatherless. Milah gives him the baby and leaves the home. ("Manhattan")

When Baelfire is bitten by a poisonous snake, Milah and Rumple go to Fendrake the Healer who reveals that their son will be dead in a day... if they don't give him the antidote. He offers it to them for one hundred gold coins, which obviously they don't have, and on their way out of his hut Milah orders her husband to go back later and kill the healer so that he can then just steal the antidote. She then spends their last gold coin on a dagger, heading to a tavern and encouraging Rumple to pick it up; however, he is scared to do so, leading Milah to implore him to be brave for once in his life to save their son. When he leaves, a drunken lout stumbles over Milah, and a man quickly comes to her rescue and punches out the aggressor. He introduces himself as Captain Killian Jones, before buying Milah a drink. Upon realizing that he is a pirate, she is intrigued, wanting to explore all the places he's been along with him - but she can't, because she has responsibilities. She tells him about her ailing child and her husband, and Killian tells her that if her situation ever changes then she should come to him, since he's in port pretty often. She insists that it won't but thanks Killian for his offer. That night, Rumple returns with the antidote and Milah gives it to Bae. She wonders what they have to do with the body of the healer, but Rumple explains that he made a deal with Fendrake. He promised him his second-born child, and Milah is furious that he made this giant decision about their future without her. Bae wakes up, cured, and his parents tell him that everything is all right, but Milah is still fuming. Rumple insists that Bae is all the future they need, and Milah angrily says that he has decided the rest of her life for her. She then heads back to the tavern, which becomes a frequent occurrence. ("Devil's Due")

Almost four years later Rumple enters their home calling his both wife and son, but finding his son alone, decides to search for Milah. He finally finds her enjoying at the tavern in company of men, including Killian Jones. When Rumple asks to Milah to leave she replies that he can leave but she stays. Killian asks her who is the man and she answers that it's nothing, just her husband. Killian begins to mock Rumple until he sees Bae enter and call her "Mama." Milah then goes to her son and leaves with him and her husband. Later, in their home, Milah and Rumple have a discussion about Rumple's decision during the War, and her unhappiness. The next day, Milah leaves her family to be with Jones and to become a pirate. They fake a kidnapping, which Rumple foils in an attempt to take back his wife. But in his "triumph" he wavers when Jones proposes a duel for Milah's return. With Rumple's failure to even try, Milah goes on to run away with Jones - who becomes her lover - traveling and becoming a pirate. However, while she fulfills her dreams, her son misses her greatly. Years later, she learns that Rumple has become the Dark One, and there is search for a magic bean. However it seems that she is ignorant of her son's fate. She also learns that with his new found powers, Rumple has provoked a duel with Jones who has told him that Milah died. As Jones loses against the Dark One and is near to death, Milah interposes revealing that she is alive as well, as is her love for Jones. She says to her husband that she has what he wishes, a magical bean which she stole from William Smee. She makes a deal with him: her and Jones' life for possession of the bean. Rumple accepts and with them, boards the Jolly Roger Here Rumple says that he recognizes that Milah is truly in love and she thanks him. However he asks her how she could leave their son. Milah answers that although Bae has missed her more than anything during all this time, she never loves Rumple. Angry, Rumple crushes Milah's heart who dies in Jones arms. In revenge, Jones tries to kill Rumple but fails because The Dark One's immortality and the latter cuts off Jones' hand to recover the magical bean. ("The Crocodile")

After dying, Milah's soul is transported to the Underworld, where she works as a crossing guard. When her husband Rumple comes down to help the now deceased Killian Jones, he finds his ex-wife and points out the irony in her job - she has to look after children for eternity, when she never looked after her own. He needs her help in rescuing her former lover, who is now the lover of Emma Swan (who also had a child with Baelfire). Milah, being a dead person, helps them cross the threshold into Hades' lair. Once they penetrate the barrier, Rumple tries telling Milah that her services are no longer required while Emma tells her "mother-in-law" (and indirectly "her father-in-law") that she had a vision of Baelfire, who is dead now, and assures that he's in a better place. Milah is happy to hear this and wants to help them cross the River of Lost Souls and save Killian, for reasons of her own. Once the boat - which will be used to escape the Underworld - makes it to the other side of the river, Milah agrees to stay behind and keep an eye on Rumple while Emma saves the pirate. If he tries anything, she'll shout. They end up discussing Milah's unfinished business, and she reveals that the reason she's helping save Killian is because she thinks it will get her one step closer to being reunited with Bae - her true unfinished business is being forgiven by him. Rumple is confident that Bae will forgive her, like he forgave his papa who was also a flawed parent in his upbringing, and asks Milah to say hello to their son for him when she crosses over. Soon though, Hades appears and freezes Milah. He talks with Rumple, saying that he'll provide him with passage home to his new wife if he destroys the boat he came in. Rumple points out that Milah would tell Emma, and so Hades suggests that he find a way to prevent that. When Milah is unfrozen, she realizes that her husband has been compromised, and tries calling to Emma before he remorsefully uses his magic to fling her into the River of Lost Souls, damning her forever. He blames this on Hades, leading Killian to vow that the Underworld's leader has much to answer for. ("Devil's Due")

However, after Hades's death, it's revealed that the River is now escapable -- heavily implying that Milah's fate isn't permanent after all and her chances of reconciling with Baelfire could be fruitful as well. ("Last Rites")

1 of 18
Add photo
Retrieved from "https://onceuponatimeabc.fandom.com/wiki/Milah?oldid=112973"
Community content is available under CC-BY-SA unless otherwise noted.