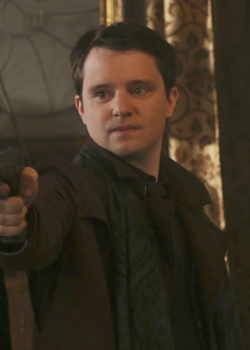 Michael Darling is a minor character on Once Upon a Time. He is the youngest brother of Wendy Darling, who finds himself in a dangerous situation after his sister visits the dangerous Neverland.

The Darling family, consisting of Michael, John, Wendy, Mary and George, take in a young boy named Baelfire, and he is shocked to learn that the family's children have been interacting with a magical shadow that visits their window at night. It is soon learned that the shadow is dangerous, and after it takes Wendy to the dreadful island that is Neverland and brings her back again, she reveals that it will return as it wants to kidnap a boy specifically. When the shadow returns, Bae and the Darlings take extensive measures in order to prevent it from taking John or Michael, however, Michael, being very young, doesn't understand and simply stands in the middle of the room. This makes him an easy target for the shadow, who attempts to kidnap him, but Baelfire bravely steps in and offers himself up as the shadow's victim. The Darlings then watch as their friend is taken to Neverland against his will. ("Second Star to the Right") Peter Pan, the island's ruler, takes Wendy prisoner when she returns to Neverland to save Bae. Michael and John are then forced to do Pan's bidding, with their sister's life at stake. ("Dark Hollow"/"Think Lovely Thoughts")

When Regina, known in the past as the Evil Queen, adopts a baby in possession of the heart of the truest believer, decides motherhood is too much, and returns the boy to the adoption agency, Michael and John are sent by Peter Pan to adopt the child and surrender it to him. However, when they arrive at the agency, having expressed interest in the child, Regina realizes how much she loves him, and decides to keep him, taking Henry home with her. The news is broken to the two brothers who leave the agency heavily disappointed, knowing that Pan won't be pleased by this failed attempt to procure the prophesied child. ("Save Henry")

Many years later, Michael and John are ordered by Pan to infiltrate the magical town of Storybrooke, and the two of them manage to drive in just as a protection spell is being cast, which would have prevented them from doing so. They remain dormant for five days until they see the mermaid named Ariel come ashore, having been warned that she may come to town by their leader. Ariel works with Belle in order to find Pandora's Box - a magical item which should help Rumplestiltskin and others defeat Pan - but before they can send it back to Rumple, John and Michael hold them at gunpoint, tying them up and stealing the box. They then head to the town mines in order to use a dwarf's axe to destroy the box, but they are soon met Belle and Ariel, who have managed to escape. Belle, thinking on her feet, uses a mine cart to run over the brothers before they can destroy the box, and she takes it for herself, kicking away their guns. John and Michael then explain themselves, telling the girl that they're only following Pan's orders because he has their sister Wendy as his hostage, and they're worried for her life. Belle tells the boys that the people she's helping are setting out to defeat Pan, meaning their sister will be free, and so the brothers let the box be taken back to Neverland by Ariel with no fuss. ("Dark Hollow")

Wendy, along with everyone else aboard the Jolly Roger, arrives in Storybrooke, Maine, where she is spotted quickly by her brothers John and Michael Darling. Spotting them back, she runs up to them and hugs them, surprised and overjoyed to be seeing them again, now as adults. She then asks them if they remember Baelfire, and reintroduce them to the adult version known as Neal Cassidy. Baelfire and the three Darlings then share a joyous group hug, happy to be reunited at long last. But they are soon put under threat when Pan, who's disguised as Henry Mills, steals a Dark Curse capable of wiping the minds of all those in Storybrooke, freezing them in time. ("The New Neverland")

1 of 5
Add photo
Retrieved from "https://onceuponatimeabc.fandom.com/wiki/Michael_Darling?oldid=93180"
Community content is available under CC-BY-SA unless otherwise noted.