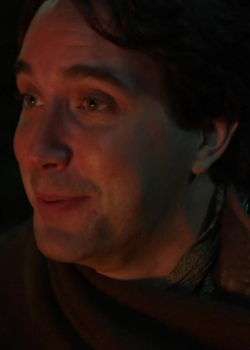 This Merry Man is one of Robin Hood's loyal Merry Men, who joins him on adventures to steal from the rich in "Forget Me Not".

When Will Scarlet wishes to join Robin Hood's Merry Men, they give him a test robbery to see if he has what it takes. Little John, Friar Tuck and another Merry Man create a diversion on a road, where they pretend that Friar Tuck has injured his leg. A carriage, ridden by a wealthy man stops to help, and as they distract the driver, Will uses his stealing skills to take two bags of golden treasures. Later on, the men celebrate their successful robbery, mocking the look on the driver's face when he saw the "blood" on Friar Tuck's leg, which turns out to have been berries. After Will is initiate and officially becomes a Merry Man, he manages to convince Robin Hood to steal from Maleficent. The Merry Men go together and raid Maleficent's castle, however, they have strict instructions to only steal the gold and nothing more, as magic is something they don't involve themselves in. They manage to steal the gold, but Will sneaks a looking glass from the witches castle. As the Merry Men celebrate again, they receive a warning from Maleficent, stating that she wants her magical item back, not caring about the gold. The Merry Men are shocked that someone stole selfishly for themselves, and it's later revealed that Will was the thief. ("Forget Me Not")

Retrieved from "https://onceuponatimeabc.fandom.com/wiki/Merry_Man_(W.03)?oldid=60149"
Community content is available under CC-BY-SA unless otherwise noted.