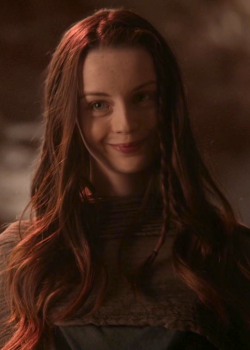 Megara is an episodic character on Once Upon a Time. She was once a resident of the Enchanted Forest, but following an encounter with Cerberus, she winds up dead and in the Underworld for all eternity, that is, until she is met by a group of heroes on their way to rescue Captain Hook. Upon being rescued and helping defeat the three-headed beast that caused her undoing, she is able to move on to Mount Olympus with a new love, Hercules.

Hercules, a demigod is unable to enter Mount Olympus until he completes the twelve labors, and so he spends his time in the Enchanted Forest doing so. Following an encounter with Snow White, and helping her be able to lead her people, he winds up battling a three-headed beast known as Cerberus, and when on the quest to doing so, he runs into Megara. Because of unknown circumstances, Megara had been on the run from the beast, and when running into Hercules the two briefly argue over what to do, but Hercules pleads for Megara to go on her way and allow him to take down the beast after the two of them. This results in Hercules life being taken, however, and soon after it kills Megara as well. The two both end up in the Underworld for years to come, but Megara remains the prisoner of the Underworld's ruler, Hades. ("Labor of Love")

Years later, the now deceased Captain Hook winds up as Hades' prisoner with Megara, but he helps her escape while holding off Cerberus, the guardian of the prison, himself. Megara is sent off to find Emma Swan, and is soon rescued by the Savior and Regina. Back at the Underworld's version of the Blanchard Loft, Meg explains what all is going on, and Mary Margaret later enlists Hercules to help defeat Cerberus. Briefly separated from the group, Meg goes to hide in the library, but ends up being found by Mary Margaret and the demigod and helps the two of them kill Cerberus once and for all. Nearly passing out from shock, Megara is caught by Hercules, and upon looking into each others eyes, they both become starstruck with one another. They exchange names, and later on, at the diner, realize their paths had crossed shortly before their deaths in the Enchanted Forest. Mary Margaret realizes that Hercules unfinished business wasn't just defeating Cerberus, but also saving Meg, and she and some of the other heroes later accompany the two to the flaming cave where they are able to cross into Mount Olympus. ("Labor of Love")

1 of 1
Add photo
Retrieved from "https://onceuponatimeabc.fandom.com/wiki/Megara?oldid=89361"
Community content is available under CC-BY-SA unless otherwise noted.