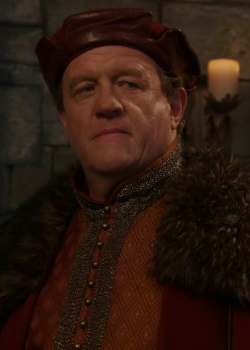 Maurice is a supporting character on Once Upon a Time. The father of Belle, he leads an ongoing war against the ogres of the Enchanted Forest, but when approached by Rumplestiltskin, a man willing to make all of this go away, he is forced to say farewell to his daughter as she sacrifices her freedom to the Dark One to protect the ones she loves. In Storybrooke, after the Evil Queen's Dark Curse is cast, he lives as Moe French, a florist, who holds Mr. Gold as an enemy. His memories eventually return though, and overtime he is eventually able to accept Belle's blooming romance with the Dark One... more or less.

Because of frequent ogre attacks in his kingdom as of the late, Maurice wishes to set up his daughter Belle with Sir Gaston, the eldest son of Lord LeGume, whose army will be of great assistance to current predicaments. Belle opposes the idea of an arranged marriage, but agrees to one walk when meeting Gaston; however, during this, they come across a baby ogre stuck in a pit. Belle wishes to help the creature, while Gaston believes it to have poor intentions. She and Maurice set off to find the Mirror of Souls to learn the truth, but when they return they discover Gaston to be in a poor state. He claims the ogre attacked him and escaped, and so Maurice decides to lead an army after the foul creature, but when finding it, Belle defends the creature, and comes to realize the ogre to be innocent. It's also discovered from fresh wounds that Gaston had tortured it, which is further confirmed when the mirror reflects Gaston with demonic eyes. The ogre is freed, but war soon breaks out between the kingdom and ogres. Maurice reveals to Belle that Gaston still wishes to marry her, and convinces her to accept his marriage proposal in order to secure Lord LeGume's army for the kingdom. ("Her Handsome Hero")

An ogre attack on the castle leaves Maurice widowed, and Belle without a mother, but the latter has since lost memory of these events, so when she wakes up to find Maurice and other royals attending her mother's funeral, she is determined to find out what has happened. Maurice tries to ward Belle off from searching for the truth, but she doesn't listen, and instead leaves for Arendelle in search of rock trolls. Grand Pabbie is able to give her a rock containing her missing memories, which she is to brew in a kettle and drink, but when an incident with the Snow Queen sends her home empty handed, Maurice finally confesses the truth: his wife stood in the way of the ogres so that guards could get Belle to safety, but by the time the guards returned for her, she was already dead. Belle is finally able to move past this, knowing her mother died a hero, but she believes the war needs to stop. She goes on that during her trip she came to learn of Rumplestiltskin, a sorcerer who may be able to help, and though Maurice is against this, Belle is willing to pay the price of magic the Dark One charges, for she wishes to be a hero like her mother. ("Family Business")

The war between Maurice's kingdom and the ogres worsens, and all hope is appearing to be lost; however, their call to Rumplestiltskin is answered, and he arrives, willing to make a deal. He offers his assistance of putting an end to the war, but for a price; Maurice initially agrees, but retracts this proclamation when he learns that the price Rumplestiltskin is asking for is Belle. The Dark One is looking for a caretaker for his "rather large" estate, something Maurice does not want his daughter to be apart of. Belle stands up for herself though, stating that she decides her own fate, and thus agrees to give up her freedom if Rumplestiltskin agrees to save the kingdom. Maurice pleads that she doesn't, but Belle ends up leaving with the Dark One. ("Skin Deep"/"Out of the Past") During her stay with the Rumple, Belle runs into her childhood friend, Samuel, who claims to have been sent by Maurice to rescue her from the Dark One. She soon figures out otherwise though, learning that he was jut a mercenary sent to collect the dagger to use the Dark One to plunder the Enchanted Forest. ("Out of the Past") When Belle is eventually kicked out by Rumple, she is captured by the Evil Queen, who later tells the Dark One that she threw herself from a tower when turned away by her father. ("Skin Deep")

Since the Evil Queen's curse has been cast, Maurice has been living in Storybrooke as a florist by the name of Moe French, and having made an enemy of Mr. Gold (the Storybrooke counterpart of Rumplestiltskin), his truck, and the contents inside are repossessed just before Valentine's Day, one of his busiest nights of the year. He ends up robbing Gold, but Sheriff Emma Swan is called and she is able to track down all of the missing items... all but one. This leads him to taking matters into his own hands, resulting in him finding and kidnapping Moe, taking him to his cabin in the woods and asking who told him to steal the missing item. Moe refuses to answer, and this ends up with Gold lashing out about the past the florist does not remember. He begins beating him senseless, screaming about how "she" is gone and that it's all his fault. Emma soon finds them, however, and she stops Gold, calling for help so that Moe can be taken to the hospital, while she meanwhile locks Gold away in the sheriff's station. Regina later visits when he is alone, and Gold realizes that it was she who told Moe to go after a certain, particular item. When confessing to Regina that he has his old memories back, she returns the chipped cup that Moe stole for her. ("Skin Deep")

The Dark Curse has been broken, and Belle, who has been revealed as alive, is able to reunite with Rumplestiltskin. Things are not ideal for the couple though, and so Belle leaves him, sending the panicking Dark One to search town for her. He visits Maurice at his shop, who acts none-the-wiser of his daughter's location, but when learning that Belle has fallen in love with Rumple during her time away, she sends Mr. Smee to kidnap her, thus arranging their reunion. This is all cut short though when he realizes she plans on returning to Rumple, so he has Smee take her to the town mines and handcuff her to a cart, planning to send it off down the tracks and over the town line so that she forgets all about her past with the Dark One. Rumple gets the help of David and Ruby though, and the three confront Maurice; they learn what he plans to do, and so the four hurry to the mines where Smee has already sent Belle off down the tracks in a railroad cart. Rumple uses his magic to save Belle in time, but she is still upset over what all has happened, and she tells both Rumple and Maurice that she wishes to see neither of them ever again. ("The Crocodile")

All is eventually forgiven between Belle and Rumple, and the two become engaged. On the night of their wedding, Dr. Archie Hopper, apparently an ordained minister, waits in the woods with Rumplestiltskin, whose dressed in a fine suit, whilst Belle, dressed all in white, approaches alongside her father, Maurice, whom she's recently forgiven for the mine incident over a year previous, as well. He gives his daughter away, and Archie officiates a marriage ceremony between she and the Dark One, who Maurice has recently forgiven also, knowing him to be a changed man now. The happy couple make their vows to one another; Belle says that, where it may seem she's spent her life losing Rumple, she's actually spent her life finding him, whilst he says that, when they met, he was unloved and unloving, but she managed to change that. He wonders why she continues to love him, and she finishes by saying that, sometimes, the best books have the dustiest jackets, and sometimes, the best cups are chipped. The two of them kiss, thus officially making them husband and wife. ("There's No Place Like Home")

Belle's marriage to Rumple proves to be anything but perfect, and over the course of the time they spend together, the Dark One falls back into old habits, going on to deceive his new wife and everyone else who he may hold dear in order to see through his own villainous plans. He fails though, multiple times, and when finally being stripped of the darkness it allows him to start finally seeing through redemption. He does just that, but Belle still does not wish to take him back just yet; however, when the previous Dark Ones all rise from the Underworld, Rumple acts fast to get Belle out of town and safely away, giving her a potion to avoid the effects of the town line. He watches as she goes and says goodbye to Maurice, but when the Dark Ones are defeated, Henry calls Belle, letting her know of her husband's bravery and selflessness, thus sending her back into town so they can reunite. The cycle starts all over again though, for Rumple has now found a way to regain his powers and is back to his same old deceiving self, once again keeping secrets from his blissfully ignorant wife. ("Swan Song")

As events transpire during Rumplestiltskin's visit to the Underworld, Belle is revealed to be pregnant with his child. She puts herself under a sleeping curse, however, for it is the only way she can protect herself and her baby from Hades. She's discovered the man her husband really is, again, and so she tells him to go to her father to wake him up once the contract regarding Hades' claim to their child is torn up. Rumple does just that, with his own kiss of true love no longer working on his sleeping wife, but when Maurice is told of all that has happened, he refuses to help. He has come to believe that Belle is more better off under a sleeping curse than with the Dark One, and so he states that until Rumple is gone he will not help. Rumple reveals his cane though, threatening to beat him into doing so, similar to what he did several years prior, but Maurice states that he'd much rather die at his mercy than subject Belle to a life with him. Rumple is unable to harm the florist though, for Emma Swan arrives in search of the Dark One. She tells Maurice to flee so that she may speak with Rumple alone. She wishes for his assistance with the current problem with Hades at hand, but the Dark One refuses, stating that the Savior caused this mess. ("Last Rites")

1 of 3
Add photo
Retrieved from "https://onceuponatimeabc.fandom.com/wiki/Maurice?oldid=103768"
Community content is available under CC-BY-SA unless otherwise noted.