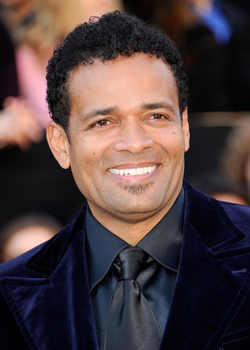 Mario "Chip" Cain Van Peebles was born Mario Cain Van Peebles in Mexico City, Mexico, the son of writer, director and actor Melvin Van Peebles and German actress and photographer Maria Marx. He graduated from Saint Thomas More School in Connecticut in 1974 and from Columbia University in 1978 with a bachelor's degree in economics.

Over the next three decades, Van Peebles starred in and directed many television shows & films, including Panther, Ali, New Jack City, and an episode of Lost.

His 2004 biopic BAADASSSSS! describes the making of his father's seminal film, Sweet Sweetback's Baadasssss Song. Van Peebles also directed Malcolm Takes a Shot, a CBS Schoolbreak Special about an aspiring high-school basketball star whose obstacles include epilepsy and his own arrogance. Van Peebles appeared in the special in a cameo, as Malcolm's doctor.

Van Peebles played the lead in the short-lived detective show Sonny Spoon. The show ran for two brief seasons, both of which aired in 1988, before being canceled.

Van Peebles guest-starred on the television show Damages, as Agent Harrison. Van Peebles was first brought on to the FX series to direct a few Season 1 episodes, and was then cast in a small role as an agent. He appeared in eleven episodes. He is good friends with fellow actors Christopher Lambert and Jean-Claude Van Damme. Van Peebles and his family live an environmentally sustainable lifestyle, as documented in the reality series, Mario's Green House, which premiered on TV-One on September 27, 2009.

In 2014, Van Peebles directed his first episode of Once Upon a Time.

Once Upon a Time directing credits

The following is a list of episodes of Once Upon a Time that credit Van Peebles as their director.

Retrieved from "https://onceuponatimeabc.fandom.com/wiki/Mario_Van_Peebles?oldid=111405"
Community content is available under CC-BY-SA unless otherwise noted.