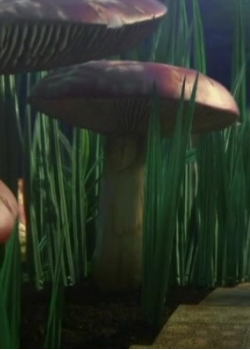 Magic mushrooms are a magical fungi that grow in, and are native to, Wonderland. They have the ability to manipulate the size of anybody who digests them.

When Henry is kidnapped by Cora and held captive in Wonderland, Regina gets help from Jefferson to take her there and retrieve him. She finds him hidden in a box in a vault, having been shrunk. She gives him a piece of mushroom, which breaks the spell that was put on him and returns him to his normal size. ("Hat Trick") When a giant named Anton becomes curious of the human way of life, he climbs down his beanstalk and peacefully looks around the local town. However, people believe him to be terrorizing them, so Prince James and Jack are arranged to meet up with him to stop him. They pretend to be his friend and give him a piece of magical mushroom that reduces his size to that of a human's. ("Tiny")

When Alice returns to Wonderland in order to gain proof of everything being real, she manages to steal a piece of the magic mushroom that the hookah smoking Caterpillar sits upon all day. As she escapes deeper into Wonderland, the Caterpillar angrily yells at her that it's his and asks her to give it back. Later, as she finds herself on the run from royal guards in the Queen of Hearts' maze, she and the White Rabbit she's taken hostage both eat the magic mushroom to shrink and hide in the hedge. ("Down the Rabbit Hole")

When Alice returns to Wonderland again, this time to be reunited with Cyrus, she finds herself in a dangerous situation when the Cheshire Cat, who has become quite evil, attempts to eat her. However, before he can do so, Will, the Knave of Hearts, gets the cats attention. Angry, the cat pounces at Will to eat him, but Will throws a piece of mushroom in the cat's mouth, shrinking it to the size of a normal cat. ("Down the Rabbit Hole")

It is discovered that Cora brought Anton the giant with her to Storybrooke, hoping he'd cause havoc. However, to make him easier to travel with, she shrunk him. Regina tracks down the not-so-giant giant, and gives him a piece of magic mushroom, which causes him to grow back to his normal height, enabling to destroy the town. However, the effects of the mushroom don't last long, and when Anton makes a hole in the ground, he finds himself trapped in it. ("Tiny")

Retrieved from "https://onceuponatimeabc.fandom.com/wiki/Magic_mushrooms?oldid=100643"
Community content is available under CC-BY-SA unless otherwise noted.