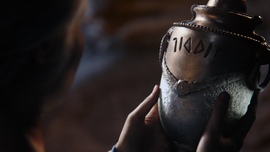 The Magic Urn is the item in which Elsa and Ingrid were once trapped.

Ingrid the Snow Queen is fearful of the icy powers she has and decides to leave her home in Arendelle. As she packs her things she's caught by her sisters who persuade her to stay as Gerda has heard of a powerful sorcerer that can help contain magic; it is none other than Rumplestiltskin. They visit Rumple and he gives them the magical urn, in return for their ribbon bracelets, as they're a symbol for love and this makes them tainted with magic. Once they return home, the Duke of Weselton, Helga's suitor, makes a move on Ingrid, but she defends herself with magic. He attempts to lie to Helga about what happened, but she doesn't believe him. A fight breaks out and the Duke makes threats, so Ingrid attempts to stop him with magic. However, Helga gets in the way and she turns to ice before crumbling into pieces. Gerda discovers Ingrid beside their sisters dead frozen body and she begins to fear her. Despite Ingrid's pleas for help, Gerda uses the magic urn to trap her. Gerda then visits Grand Pabbie and asks him to remove everyone in Arendelle's memories of her two sisters. ("The Snow Queen")

When Prince Hans and his twelve brothers declare war on Arendelle, they seek out the magic urn. However, Kristoff overhears this and reports it to Elsa. The two seek out to find the urn, but once they do they're stopped by Hans and his brothers. Hans threatens to kill Kristoff if Elsa doesn't hand over the urn. Eventually she agrees to and Hans opens the urn. A while liquid pours out and ends up taking the form of the Snow Queen, Ingrid. She turns Hans to ice for calling her a monster and the brothers run away in fear. Elsa is grateful for being saved, so the Snow Queen explains nobody should be trapped in that urn... especially someone as special as her. ("Rocky Road")

Ingrid lies to Elsa and tells her that Anna planned to use the magic hat on her which would take away her powers, causing Elsa to storm into the dungeons, where her sister is being held, and angrily confront her. However, this is soon revealed to be a ruse for the guards' benefit so that Ingrid doesn't found out that Elsa is freeing Anna. They search the castle for the magic urn so that they can trap Ingrid and eventually find it in the closet with a frozen Hans. They then station Anna back in her cell so that Elsa can send Ingrid there and Anna can trap her; however, Ingrid is already lying in wait and she seizes the urn so that she may cast the spell of Shattered Sight over Anna, which only allows her to see the absolute worst in her sister. Because of this, she berates Elsa for all she put her through during childhood and ends up throwing her necklace into the fireplace. She then traps her sister in the urn, but Elsa doesn't care, knowing that Ingrid has done something and that these aren't her sister's true feelings. When Elsa is trapped, Anna comes to her senses and tries confronting Ingrid, along with Kristoff, but the Snow Queen simply embraces the fact that everyone thinks she's a monster and freezes them, as well as the entirety of Arendelle. Ingrid proceeds to use the magic of the rock trolls to steal Elsa's memories so that she and her niece may have a fresh start, and Rumpelstiltskin pops by for a visit, taking both Anna's necklace from the fire and the urn containing Elsa, which he transports to the dark vault within his own castle, refusing to give her back until he once again possesses the sorcerer's hat. However, Ingrid decides to follow a prophecy and head into a land without magic instead of giving the hat back, in the hopes that she and Elsa will be reunited one day, along with their third magical sister. ("Smash the Mirror")

Emma and Hook become trapped in Rumplestiltskin's vault and whilst trapped, Hook begins to look around and picks up magical urn, however, Emma tells him to put it down in case it's dangerous. Emma and Hook find a way to return home using a magic wand that's capable of performing any magic that's ever been accomplished. With this, she opens a portal to the future, and the urn is last seen shaking atop one of the vault's surfaces when this occurs. Emma and Hook make their way back home, but with Robin Hood's wife Maid Marian. The formerly Evil Queen Regina is not so happy with this discovery and tells Emma that she better not have brought anything else back with them. Across town in Zelena's barn, it's revealed that the urn was brought back through the portal. The lid bursts open, and a blue liquid pours out, forming the shape of Elsa, the Ice Queen. She removes her glove and destroys the urn that once constrained her, before leaving the barn with a trail of ice. ("There's No Place Like Home")

Mr. Gold at some point returns to Zelena's barn to collect the powdered pieces of the broken urn. Wishing to be free of the dagger's control, he needs more magic for the hat and decides to manipulate Emma into absorbing herself into it. To keep the Snow Queen, who cares for Emma, out of the way, Mr. Gold sprinkles the urn's ashes around her; entrapping her temporarily inside her snow lair. Ingrid is unable to break free from the circle but attempts to warn Emma using magic. Ultimately Emma, with Elsa's encouragement, makes the decision to accept magic as part of herself. Eventually the power of the urn wears off, allowing Ingrid to place her ribbons and Emma and Elsa, so she can begin the casting of the Spell of Shattered Sight. ("Smash the Mirror")

Retrieved from "https://onceuponatimeabc.fandom.com/wiki/Magic_Urn?oldid=110069"
Community content is available under CC-BY-SA unless otherwise noted.