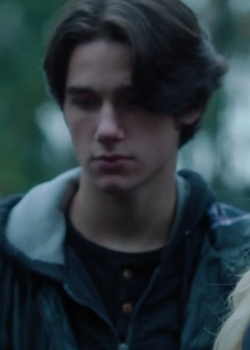 The Lost Boy is a minor supporting character on Once Upon a Time. He is an unnamed member of the Lost Boys, working for Peter Pan in his quest to obtain Henry Mills.

When Baelfire arrives in Neverland and finds his way on Hook's ship, Felix and the rest of the Lost Boys sail out in order to collect him. Felix wonders if Hook knows who they are; he does and adds that he knows who they work for. He tells Felix that the boy isn't on the ship, so they begin a search. After a search in the cabins, Felix is unable to find the boy they're looking for, and then warns Hook that his leader rips the shadows from those who lie to him. Before leaving, Felix reminds Hook that if he finds the boy, he knows who he belongs to. A while later, Hook betrays Baelfire and turns him over to the Lost Boys. Felix and the others return to the ship and take him back to the mainland. Once ashore, Felix confirms with two other Lost Boys if he's the one that their leader wants, and it turns out he isn't. Felix tells Bae it's his lucky day as he gets to live. A short while later, Felix assures the Lost Boys that they will eventually find the boy they're looking for, even if it may take some time. ("And Straight on 'Til Morning")

When Greg and Tamara arrive in Neverland with the boy that the Lost Boys have been searching for a long time, Henry Mills, they surround the two and its revealed that the Lost Boys are the Home Office that Greg and Tamara work for. Confused that they've been working for a group of teenagers, Greg and Tamara refuse to turn Henry over until they are told what will happen to him. However, things take a turn for the worst and Peter Pan's shadow takes Greg's shadow, and Tamara is shot by an arrow. Henry manages to escape and is found by Peter, who poses as his friend, and together they run away from the Lost Boys. The Lost Boy chase the two through the jungle, firing arrows at them in an attempt to stop them, but its to no avail. They end up trapping the boys in some caves, but lose them when they use pixie dust to fly away. Later on, after Peter is convinced that Henry has the heart of the trust believer, the Lost Boys regroup and Peter's true identity is revealed. The boys then surround Henry intimidatingly. ("The Heart of the Truest Believer")

Gold is seen walking through the woods of the island, and he is stopped when he hears voices. He notices two Lost Boy sentries in a clearing next to him, and makes their way to them through the plants. The boys notice him, and one starts to order him to stop by order of... he is unable to finish his line, for Rumple casts a sleeping spell on them. They fall unconscious to the floor, dropping their weapons in the process, and the Dark One says he doesn't take orders. He then proceeds to pick up one of their spears, and he is caught off-guard by someone rushing through the bushes, panting. Gold prepares to hit the incomer with the spear, but the runner is startled and stopped cold on his track by the sight of the weapon-yielding man. They then look at each other and recognize one another... father and son. The runner is Neal, who has accidentally found his way to his father. Rumple is full of surprise and confusion. Later, when Neal manages to take Henry from Pan's camp, the Lost Boys track him down and take him back. They then dance around their fire, celebrating. ("Nasty Habits")

Following the return of Pan's immortality, Henry's family returns to the Lost Boy's camp where Regina threatens to rip out Felix's heart if he doesn't reveal Pan's whereabouts. Emma stops this, however, taking a new approach by winning over the Lost Boys by offering to take them back to Storybrooke where they can be apart of loving families. Felix argues that Pan is the only family they'll ever need, and tries dissuading the other Lost Boys from believing Emma as she discloses Pan only needs Henry's heart not to save the island, but to save himself. The Lost Boys end up siding with Emma instead of Felix, ultimately revealing Pan has head for the Thinking Tree near Pixie Woods. Following Pan's supposed defeat, everyone hops aboard the Jolly Roger to go back to Storybrooke, including Felix, who sits alone all depressed. However, once refusing to eat food offered to him by Henry, the boy reveals his true identity as Pan, as he used magic to switch bodies with Henry, who is now trapped in Pandora's Box. Pan tells Felix to eat up, as there is much to plan next. ("Save Henry")

The Jolly Roger arrives back in Storybrooke with all the Lost Boys, who take up residence in the seaside town. Pan is soon defeated, causing all the town's residents to be sent back to the Enchanted Forest where they take refuge in Regina's palace. They're all soon met by a new villain, however, the Wicked Witch of the West, who causes them to all be sent back to Storybrooke a year later. As the Witch starts wreaking havoc on the town, she causes the life of Neal Cassidy to be taken, in order for Rumplestiltskin to reveal Zelena's identity. A funeral is held in honor of Neal, which the Lost Boy attends, along with many other residents of Storybrooke. Once saying farewell to his long gone friend, he along with everyone else go back to Granny's Diner. Zelena crashes the wake where she reveals herself as Regina's sister, and challenges her to a witch fight on Main Street that evening. ("It's Not Easy Being Green")

1 of 11
Add photo
Retrieved from "https://onceuponatimeabc.fandom.com/wiki/Lost_Boy_2?oldid=73736"
Community content is available under CC-BY-SA unless otherwise noted.