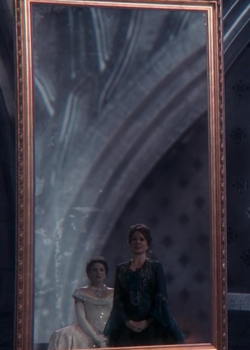 Looking Glasses are magical objects that are capable of opening a portal to the dangerous realm of Wonderland.

When Regina says that she doesn't know how to use magic, Rumpelstiltskin offers to show her and creates a doorway sheathed in gift paper, but Regina says that she doesn't want it because it will make her like Cora. The imp explains that he'll do the magic for Regina, and the doorway leads to a world without magic. All Regina needs to do is push her mother through. As Regina prepares for her wedding day, Cora comes in and sees Rumpelstiltskin's item. She removes the covering and discovers that it's a mirror, and shows Regina her reflection. Cora promises her daughter that her life will be better then she can imagine, and that once the king dies Regina can take over. Regina tries to push her through the mirror but Cora immobilizes her with a spell and says it isn't that easy to get rid of her. Rumpelstiltskin appears in the mirror behind Cora and gestures to Regina, who breaks free and pushes her mother into the mirror. Cora falls through and the mirror shatters as Regina stares at her hands in horror. ("We Are Both")

After Will helps the Merry Men pull off a heist, he is accepted amongst their ranks by their leader, Robin Hood. Here, he is taught by Robin that the Merry Men are not thieves as they do not steal for themselves, they steal for others. Will suggests that they break into Maleficent's castle and steal her gold, as rumor has it it's enough to end poverty in the entire kingdom. Knowing how dangerous Maleficent is, Robin is reluctant, but he eventually agrees to do so. Will then returns home and tells his true love, Anastasia, that he's managed to fool the Merry Men into believing that he agrees with their cause, and that they'll finally get what they're looking for after the heist of Maleficent's castle. The Merry Men manage to break in and steal the gold, however, when inside, Will steals something else also. He is seen celebrating with the rest of the group when the heist is successful, however, Maleficent uses her magic to project her voice and tell them to keep the gold if they must, but to return the other item they stole, or there shall be consequences. An incredibly angered Robin Hood asks who stole something else, and a guilty Will doesn't own up. When Will tries to leave, he is approached by Robin who realizes he stole for himself in Maleficent's castle, and he is bitterly disappointed in him, telling him that he is going to do to him the worst thing of all: nothing. Will then rides his horse back to Anastasia, who is later to become the Red Queen, and reveals that the thing he stole was a Looking Glass. The two of them then use the Looking Glass to open a portal that leads to Wonderland. ("Forget Me Not")

As Will and Anastasia prepare to jump through the portal, Anastasia's mother comes in, explaining that she followed them. She dismisses Will as a loser and tells Anastasia that it's her business if she's going to ruin her life. The mother says that she always wanted a princess, but Anastasia couldn't even break out a decent husband. When Anastasia says that she loves Will, her mother warns her that she can't live on love. Will tells Anastasia not to listen to her mother, and promises to build her a life however he can. After a moment, Anastasia takes Will's hand and they jump through the portal together. ("Heart of Stone")

At some point, Regina's father, Henry, is kidnapped by the Queen of Hearts, because the Queen of Hearts believes that Regina is a threat to her power. Regina gets help from a man named Jefferson to take her to Wonderland, where her father is being held captive, using one of his magical hats. When they enter through the looking glass, Jefferson warns her that if two enter, two must exit. Regina and Jefferson find a maze leading the the entrance of the Oueen of Hearts' castle. They manage to fight their way through the dangerous maze and to a small building filled with boxes. Regina retrieves one and her and Jefferson run back to the looking glass. However, Regina uses the contents of her box to get her father back, and, as the looking glass can only take two, Jefferson is left behind, meaning that he has to break his promise to return to his daughter. ("Hat Trick")

After Captain Hook breaks into Regina's palace and kills two guards to squeeze some information on how to defeat Rumplestiltskin from Belle, Regina's prisoner, the Queen herself intercepts him, and offers her assistance to help him get revenge on the "crocodile" he wishes to skin, should he do her a favor in return. Hook is thusly requested to assassinate Cora, Regina's mother. Regina enchants Hook's hook and tells him that it will let him magically take Cora's heart. She warns him that it will only allow him to rip out one heart. She then informs Hook that he'll be accompanied by one of the dead guards, Claude; Hook must brings Cora back, instead of Claude's corpse. Hook will go to the land where Regina banished Cora and that he will have to take two people so that two people can come back. She tells Hook that he'll be going to Wonderland and that Cora will find him when he arrives. Regina activates the hat and it opens, creating a portal. In Wonderland, Hook is unable to rip out Cora's heart, for she does not keep hers where everyone else does. Cora overpowers him and demands to be told the truth, and once she is told that he was sent there by Regina, she offers him her assistance as well, for Regina tricked him: those who are caught by her curse are destined to lose their memories, so he wouldn't be able to get revenge. Killian brings Cora to Regina, so that she can kill her daughter, but when Regina mourns her mother's apparent death and explains to her lifeless body why she did it - because she loved her too much and, as Cora once pointed out, "love is weakness" - Cora has a change of heart. ("Queen of Hearts")

Retrieved from "https://onceuponatimeabc.fandom.com/wiki/Looking_Glasses?oldid=87839"
Community content is available under CC-BY-SA unless otherwise noted.