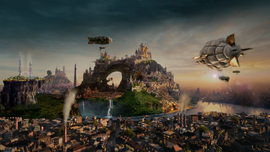 The Land of Untold Stories is a realm where people from all over have amalgamated to form a safe haven with one another; the name is seen as somewhat ironic because the land is in fact filled with stories - it's just that they haven't had the chance to play themselves out yet.

When Zelena uses the Apprentice's wand to create a portal door to the Enchanted Forest during a time that Storybrooke's magic is tethered to the Olympian Crystal, the portal malfunctions and ends up sucking she, Snow, David and Hook through to the Land of Untold Stories. First, they interact with Jekyll in the grounds of his mansion, but then Poole the orderly discovers them and knocks them out, proceeding to throw them all into a magically-sealed cage. Hyde then shows up to intimidate them, before Jekyll returns and offers to repair the wand they used to get there, which is now broken. He succeeds in repairing, but then Poole forces him to transform into Hyde (his worse half) and Hyde uses the wand to create a portal to kidnap Belle, so as to have leverage over her husband Rumplestiltskin. ("Only You") Jekyll frees the prisoners and introduces them to the Land of Untold Stories, which they find utterly fascinating. They then head to his apartment where he completes his serum and is finally able to separate from Hyde, whom the heroes attack once he breaks loose. They escape into the streets before finally a portal opens to take them all home. Jekyll gets through it, but Hyde misses his shot, having wanted to make a new home for himself in Storybrooke. Fortunately, Rumple shows up to get Belle back, and Hyde offers him some information he needs to wake her from her sleeping curse in exchange for ownership of Storybrooke. ("An Untold Story")

Retrieved from "https://onceuponatimeabc.fandom.com/wiki/Land_of_Untold_Stories?oldid=102187"
Community content is available under CC-BY-SA unless otherwise noted.