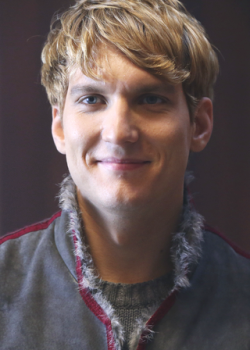 Kristoff is a supporting character on Once Upon a Time. The humble yet loving fiancé of Anna with an affinity for reindeer (namely his loyal and trusted companion Sven), Kristoff is Arendelle's official Ice Master and Deliverer as well as the kingdom's soon-to-be-prince. His love for Anna gives him something in common with the people's Queen, Elsa, who eventually goes on to form a strong bond with him as well. Despite all that happens in the next thirty years, he is finally able to marry the love of his life, thus finally getting his happy ending.

Kristoff was once friends with a shepherd from the Enchanted Forest, David. ("White Out") When Anna goes missing the day before her wedding to Kristoff, Elsa visits him and Sven hoping to find some answers. Initially trying to cover for his fiancée so she won't be followed, he suggests the Queen check the royal castle. He also suggests that Anna may be running errands. Elsa realizes this is a lie, so Kristoff soon finds himself admitting that Anna left on a boat to Misthaven in order to find out what the sisters' parents were doing when they died. Elsa, followed by Kristoff, heads to the docks in order to stop her, but she's too late. She worries that Anna will act before she thinks and because she doesn't know a thing about this Misthaven. Kristoff tells her Misthaven is locally known as the Enchanted Forest. ("A Tale of Two Sisters")

Sometime after Anna has left for the Enchanted Forest, Elsa sends out scouts to find her, worried for her well-being. She even considers going after her younger sister herself, but is talked out of it by Kristoff, who reminds Elsa that Arendelle needs their queen. Elsa soon learns that Prince Hans and his twelve older brothers are marching an army through the Southern Mountains to attack Arendelle. Kristoff offers to sneak up there and eavesdrop on Hans' plans, but Elsa won't hear of it, wanting to handle the situation herself. The soon-to-be prince disobeys Elsa, however, and spies on Hans. He returns to the castle, revealing that Hans is after a magical urn that can trap people like the Ice Queen. Kristoff then suggests he bring a few soldiers with him to find the urn and destroy it himself. Elsa decides instead of sending him with soldiers, she'll accompany him. They soon reach the cave where the urn is located, and Kristoff offers to let Elsa destroy it. She refuses, however, when she discovers ancient words written on the urn, which may have information about others like her. Kristoff continues insisting that the Ice Queen destroy the urn, but it is too late, for Hans has arrived with three of his brothers. They surround Elsa and Kristoff. Elsa tries to fight back with her ice magic, but Hans threatens Kristoff's life. Elsa promises Hans the urn in exchange for Kristoff's safety; she then apologizes for not listening to Kristoff in the first place. Putting her trust into him, the Ice Queen tells Kristoff that once she's gone, he must go after Anna and save Arendelle. Hans tells Elsa that a monster like her should not rule Arendelle, and proceeds to uncap the urn, pouring out a white liquid. The Snow Queen soon arises, and having taken insult to Hans' previous comment, turns him into an ice statue while his three brothers flee in terror. ("Rocky Road")

Kristoff is feeding Sven when Anna suddenly enters the stables behind him, much to his shock and joy. They reunite by embracing but she soon backs away; he assures her that he's bad a bath and she assures him in turn that he smells lovely (which an unbelieving Sven confirms by sniffing the air). He wonders how her mission went, leading her to sadly explain that she discovered the real reason that her and Elsa's parents went to the Enchanted Forest and it's because they wanted to find a cure for Elsa's magic, thus confirming that they actually did fear her. Kristoff says that that's bad, which Anna exaggerates, saying that the world might as well just end right now. She laments over the fact that she'll eventually have to break this news to Elsa, and doesn't know how to go about it. ("The Apprentice")

Once meeting the Snow Queen, her newly reunited aunt, Anna visits Kristoff in Sven's stables, sharing her doubts about the woman's authenticity. Kristoff sees nothing wrong with Ingrid, as she and Elsa seem to share many characteristics. Anna, however, continues to believe something is off. She then makes plans to see Grand Pabbie, hopefully get the answers she's looking for, so Kristoff agrees to cover for her and watch over Elsa. He also speaks with his fiancée about her decision to withhold the truth about what the former Queen and King did in the Enchanted Forest. Anna assures Kristoff that she plans on telling Elsa when the time is right. As their conversation wraps up, the couple share a kiss, and Anna exits the stables. Unbeknownst to them, however, the Snow Queen has been listening to the entire conversation. ("Family Business")

After Anna is arrested by Ingrid, Elsa, not believing their aunt's lies, sets her sister free and begins searching the palace for the magic urn so that the Snow Queen will be trapped once again. Kristoff aids in their search, pointing out the exhaustive lengths royals seem to go to in order to ignore their family issues when Elsa discusses Gerda's, her and Anna's mother, reason for forbidding the East Wing. When he makes this comment, Anna realizes he's still in the room and sends him to go be lookout for Ingrid, which he does whilst they manage to find the urn in a closet beside a frozen Hans. Their plan to use it on Ingrid goes awry, however. The Snow Queen ends up casting the spell of Shattered Sight over Anna which causes her to see only the worst in her sister; she thus traps Elsa in the urn. Ingrid is so enraged at this that she goes to attack Anna, at which Kristoff storms in and tries to fend off his future aunt-in-law with his ice pick, but this just worsens her wrath. Realizing that everyone sees her as a monster eventually, Ingrid decides to embrace that and be one, going on to freeze her niece and would-be nephew-in-law, along with the entirety of Arendelle. ("Smash the Mirror")

Thirty years after Arendelle was struck by Ingrid, Anna, Kristoff and all others in the kingdom finally unfreeze, which means Hans and his brothers are also free to attack the princess and her fiancé. They manage to escape, however, and decide to locate the pirate Black Beard so that they can pay him with their riches for something called the wishing star, which Anna read about in her mother's diary. Soon after they arrive on the ship and make their offer, Hans and his brothers show up yet again, having robbed the royal treasury and made their own deal with Black Beard beforehand. The pirate then sails them all out to the same spot where Anna's parents' boat sank and, per Hans' directive, the two of them are sealed in a chest and thrown overboard. Water begins filling the chest and it seems as though the engaged couple is about to drown, and so Anna tries marrying Kristoff before they both die. He refuses, however, saying that they can get married when they get out of this and, soon enough, the two of them are transported to the town of Storybrooke by Elsa, who used the wishing star (which turns out to be Anna's necklace) to wish for them to be there. The two sisters joyously reunite, but there isn't much time for celebration due to Ingrid's spell of Shattered Sight, which is about to consume the entire town and make it so that everyone turns against one another. Anna is immune due to her already having been under it before, as are Elsa and her new friend Emma, who the Snow Queen has selected to be her new sisters once everyone else has killed one another. Everyone besides these three seal themselves off from everyone else, and it isn't long before the spell is complete, causing everyone's worst selves to surface. ("Fall")

Anna becomes hurt by Kristoff's words when the spell of Shattered Sight makes him only able to see the worst in others and so she joins Elsa and Emma in the back, where she reveals that Ingrid got the idea for the spell from an old Nordic tale and, in said tale, the way in which the spell was broken was by killing the caster, which means Ingrid has to die if the town is to be saved. Anna is stuck with Prince Neal, Emma's baby brother, while she and Elsa leave to do what must be done. The princess tries calming down David and Mary Margaret when they won't stop arguing and reminding them that they love one another, but they refute this, and it isn't long until matters are made worse by the Evil Queen, who enters the sheriff's station in one of her extravagant royal ensembles. She threatens to kill baby Neal and, when Anna protests, Regina's magic sends she and Kristoff back to the beach on which they washed up. He begins complaining to her his life wasn't this complicated before he met her and her family, and tries to swim back to Arendelle. Chasing after him, she trips over on a bottle that came over in the portal and she smashes it over an enraged Kristoff's head, knocking him out. Reading the piece of paper that came out of the bottle, Anna realizes it's a message from her mother before she died. She then heads over to Ingrid's Ice Lair in order to read the note to her, leading the Snow Queen to regret everything she's done and repent for them by sacrificing herself in order to end the spell. ("Shattered Sight")

Following the Snow Queen's death, Elsa is able to remove the ice wall surrounding the town with her powers; however, some of Ingrid's magic remains, making it so that anyone who leaves town can never return. Anna is sad that they can't leave, but is assured that walking wouldn't get them back to Arendelle anyway because they need a portal. She appears in a hurry to find one, leading Elsa to assure her that they have plenty of time to get home, but the Ice Queen's sister quickly informs her that Arendelle has been conquered by Hans, and Elsa realizes that they need to get home, now. As luck would have it, Mr. Gold has located a portal over in a lakeside manner, in the form of a door. Hook tells everyone of this, and Elsa, Anna and Kristoff bid their goodbyes before leaving for good. Back in Arendelle, the three of them are able to dethrone Hans, and Anna goes on to finally marry Kristoff. ("Heroes and Villains")

1 of 39
Add photo
Retrieved from "https://onceuponatimeabc.fandom.com/wiki/Kristoff?oldid=113311"
Community content is available under CC-BY-SA unless otherwise noted.